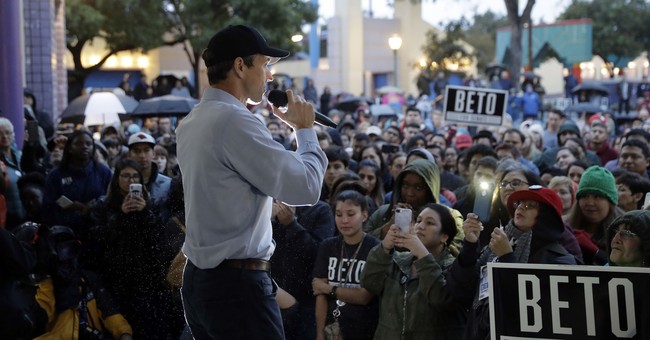 Rep. Beto O’Rourke (D-TX), the Democratic candidate for Senate running against Sen. Ted Cruz (R-TX), has inspired a lot of liberal fans nationally and become somewhat of a media darling.

In addition to the multitude of flattering media profiles, O’Rourke has a series of odd fan-made videos that got some attention on Twitter Monday.

These include a "Beto flash mob" version of the YMCA song and plenty of tributes from female fans.

We collected the most popular BETO videos on the internet.

Disclaimer: We are not responsible for any hearing loss or brain disfunction caused by any or all parts of this video, watch at your own risk.

And remember! Donate to B-E-T-O only! He is the future! pic.twitter.com/awcajEbRIY

Despite the enthusiasm of O’Rourke’s supporters, the most recent polling still gives Sen. Cruz a comfortable lead in the race.

President Donald Trump is set to campaign for Sen. Cruz in Texas Monday night as part of a rally that has received over 100,000 RSVPs.

“Texas is big and so will be the turnout for our MAGA rally in Houston, Texas Monday,” Michael Glassner, Chief Operating Officer of Donald J. Trump for President, Inc commented of the event. “That’s why we’ve organized the Donald Trump- Big Texas Tailgater outside the Toyota Center. We’ll have great food, live music, big screens, and a great time for all of our guests. Inside and out, the excitement at this Trump rally will be as big as Texas – it’s going to be epic.”