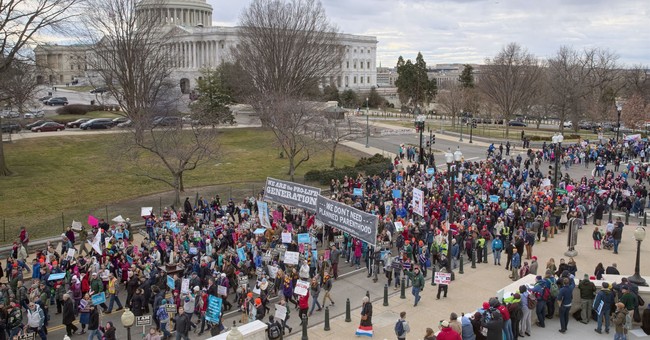 The March for Life unveiled their theme on Capitol Hill Thursday, “Unique From Day One: Pro-Life is Pro-Science.” The organization’s president Jeanne Mancini emphasized the growing body of scientific evidence that human life begins at conception.

“Our DNA is present in the moment of fertilization and no fingerprint ever, past, present, future is like yours and that’s what it means to be unique from day one,” she told reporters at the Capitol Hill event.

Mancini referenced former President Barack Obama dodging the question of when life begins, arguing that his response was not backed up by science.

“Consider in 2008 when President Obama was famously asked when does life begin,” she said, “and we can all remember he dodged the question by answering that was above his paygrade, he didn’t know and yet while that conveniently gives cover for someone who advocates for the destruction of human life in its earliest stages, scientifically it’s not factual.”

Mancini pointed out that just three weeks after conception, the fetal heart begins to beat and at eight weeks of pregnancy, “the baby’s moving around even though mom can’t quite feel that yet, by the tenth week of pregnancy, the little fingers and toes are forming.”

Dr. David Prentice, the Vice President and Research Director for the Charlotte Lozier Institute and the Adjunct Professor of Molecular Genetics at the John Paul II Institute, followed Mancini’s announcement by pointing to the consensus in the scientific community that life begins at conception.

“The mammalian body plans start being laid down from the moment of conception, your world is shaped in the first 24 hours after conception,” he said. “These are the scientific facts and this is a consensus really in the scientific world. The arguments aren’t about biology. This is accepted science and has been for decades.”

"Although life is a continuous process, fertilization is a critical landmark because, under ordinary circumstances, a new, genetically distinct human organism is thereby formed,” O’Rahilly wrote.

He also noted that both the National Institute of Health and the National Academy of Science refer to “the developing organism,” not a random collection of cells.

He referenced the 1999 corrective surgery on Samuel Armas for spina bifida at 21 weeks in utero. A photographer captured the amazing moment that Samuel reacted to the doctor’s touch and grabbed the doctor’s finger.

Dr. Grazie Pozo Christie, a radiologist and policy adviser for the Catholic Association, also spoke about the science of fetal development and the strides made in seeing the stages of growth.

“For us to believe what the pro-abortion movement tells us about early human life and the flourishing of women and the decency of our culture requires blindness, deafness, and silencing of the truth,” she argued. “Modern science has changed everything, It has opened our eyes, it’s opened our ears, and it’s allowed us to speak the truth with perfect confidence.”

“A baby’s growing in the uterus and we know it because we see it,” she said, “fetal ultrasound was, I believe, a game-changer.”

Christie’s belief that fetal ultrasounds have revolutionized the way people look at a pregnancy is not a unique one.

"You are seeing poll numbers move on abortion for banning abortions after 20 weeks,” he said. “Why? Because for the past decade, younger Americans have been going in and they have been seeing 3-D imagery where they can look into the womb."

Towards the end of her presentation, Christie played a fetal heartbeat at three weeks post-conception.

“It turns out that science opens our ears to life,” she concluded.

The 46th annual march is scheduled for Jan. 18, the anniversary of the 1973 Supreme Court ruling in Roe v. Wade that legalized abortion.