Sen. Graham Tells Audience: 'Boo Yourself' After They Boo Him For Saying Kavanaugh Was Treated 'Like Crap' 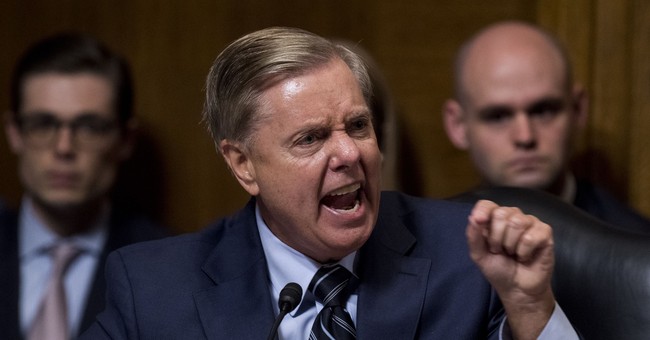 Sen. Lindsey Graham (R-SC) told the audience at the Atlantic Festival to “boo” themselves Wednesday after they booed his claim that President Trump’s Supreme Court nominee Judge Brett Kavanaugh was “treated like crap” during his testimony before the Senate Judiciary Committee on sexual misconduct allegations.

“I’m the first person to say I want to hear from Dr. Ford. I thought she was handled respectfully,” Graham said of Kavanaugh’s accuser Dr. Christine Blasey Ford, adding “I thought Kavanaugh was treated like crap.”

“Yeah well, boo yourself,” he said to the audience.

Earlier in the interview, Graham emphasized that he understood how hard it was for women to come forward about these things and pointed to the way former President Bill Clinton’s accusers were treated in the past.

"The bottom line is, I know what can happen to a woman who comes forward in a political environment. Dr. Ford, I thought, was treated respectfully by Miss Mitchell,” he said. “For every woman that comes forward, God knows how many never say a word and take it to their grave. Sometimes people are accused of something they didn't do.”

Graham shocked the audience by referencing Democratic strategist James Carville, saying “this is what you get when you go through a trailer park with a $100 bill." Carville said that in reference to Paula Jones who accused Bill Clinton of sexual harassment.

“This is actually not the first time this has happened,” Graham said to the audience, joking that many of them were too young to know what he was referring to.

Despite Graham and the moderator clarifying that the $100 bill quote was a reference to the way Clinton's accusers were handled, some in the media initially misrepresented the remarks as something Graham was saying to defend Trump's mocking of Ford.

Sen. Lindsey Graham defends Trump's mocking of Dr. Ford: "Everything he said was factual...this is what you get when you go through a trailer park with a $100 bill."

Graham was responding to a question from the Atlantic’s Jeffrey Goldberg about President Trump’s remarks at a rally Tuesday evening in which he appeared to mock Ford.

"I had one beer and that's the only thing I remember," Trump said, quoting Ford’s recollection of the night she claims she was sexually assaulted by Kavanaugh in what many perceived to be a mocking tone.

"So President Trump went through a factual rendition that I didn't particularly like,” Graham told Goldberg, “and I would tell him to knock it off. You're not helping. But it can be worse.”

“You can actually kill somebody’s cat and puncture their tires to get them to shut up," Graham said, referencing Clinton accuser Kathleen Willey’s claims.

During his testimony last Thursday, Graham vehemently defended Kavanaugh, torching Democrats for the way in which they've handled these allegations.

We deleted a tweet that did not accurately reflect the context of Lindsey Graham’s quote in the below video clip. pic.twitter.com/U5ihRhiP27