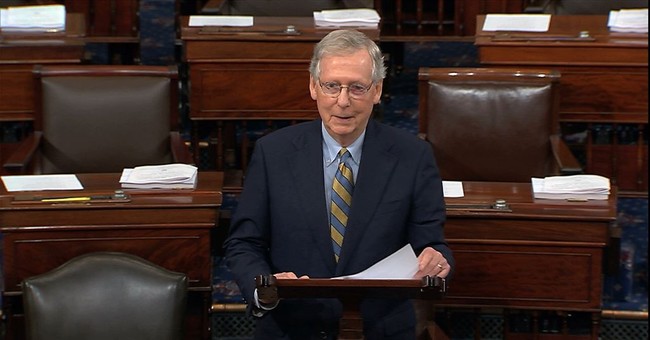 Leader McConnell said that after the Democrats were unable to halt Kavanaugh’s nomination through more conventional political tactics, “the politics of personal destruction were willfully unleashed.”

McConnell blasted the sexual misconduct allegations that come out after Sen. Dianne Feinstein (D-CA) released Dr. Christine Blasey Ford’s claims that Kavanaugh attempted to rape her while he was drunk at a party in high school. Feinstein sat on Ford’s allegations for months before finally releasing them just before the Senate was going to vote on Kavanaugh’s nomination.

“Democrats’ mishandling of Dr. Ford’s letter opened the floodgates for this deluge of uncorroborated, unbelievable mud,” he argued.

“Out of the woodwork came one uncorroborated allegation after another each seemingly more outlandish than the last,” McConnell noted, highlighting claims by Julie Swetnick that Kavanaugh was part of a group of high school guys that spiked the punch at parties and gang raped girls.

During an NBC interview Monday evening, Swetnick walked back some of the accusations in her sworn statement against Kavanaugh, raising serious questions about her credibility.

McConnell called out the Democrats handling of that accusation in particular, pointing out that Sen. Feinstein uncritically mentioned Swetnick in her remarks and all the Democrats on the Senate Judiciary Committee cited Swetnick’s claims as a reason Kavanaugh should withdraw his nomination.

“This didn’t stay in the tabloids by the way this fantastic story was effectively read into the record of the Judiciary Committee by the ranking member who decided it deserved a mention in her remarks at last Thursday’s hearing,” McConnell emphasized.

Finally, McConnell mocked the more “trivial” lines of attack against Kavanaugh including a New York Times story that Kavanaugh may have been involved in an ice-throwing incident.

“Last night The New York Times unleashed this major story, get this, Judge Kavanaugh may have been accused of throwing some ice across a college bar in the mid-1980's," he said. “Talk about a bombshell. One can only imagine what new bombshell might be published today or tomorrow.”

Many have noted since the publication of that piece that one of its co-authors, Emily Bazelon, tweeted her opposition to Kavanaugh’s nomination back in July. Her tweet reveals that she is hardly an impartial observer regarding allegations against Kavanaugh.

As a @YaleLawSch grad & lecturer, I strongly disassociate myself from tonight’s praise of Brett Kavanaugh. With respect, he’s a 5th vote for a hard-right turn on voting rights and so much more that will harm the democratic process & prevent a more equal society. 1/2

On Monday, McConnell made it clear that there will be a full vote on the nomination of Kavanaugh by the end of the week, following the completion of the FBI's probe into the allegations against him.