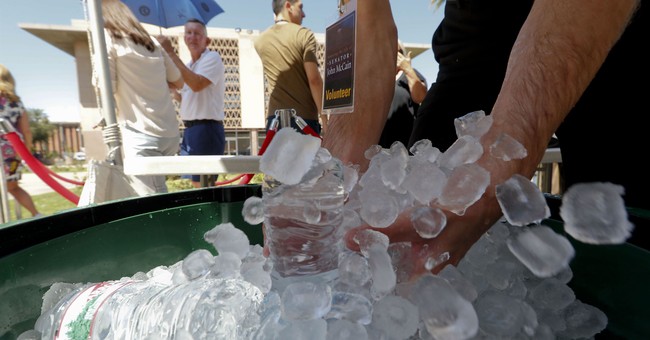 The New York Times has a major scoop on Supreme Court nominee Brett Kavanaugh…he once allegedly threw ice on someone at a bar. Yeah. It’s come to this.

In the report (if you want to call it that), the Times writers looked into a bar fight that took place in September 1985 near Yale that led to Kavanaugh and four other men being questioned by police.

“Mr. Kavanaugh was not arrested, but the police report stated that a 21-year-old man accused Mr. Kavanaugh of throwing ice on him “for some unknown reason.”

A witness to the fight said that Chris Dudley, a Yale basketball player who is friends with Mr. Kavanaugh, then threw a glass that hit the 21-year-old-man in the ear, according to the police report, which was obtained by The New York Times.

The report said that the victim, Dom Cozzolino, “was bleeding from the right ear” and was later treated at a local hospital. [...]

Mr. Dudley denied the accusation, according to the report. For his part, speaking to the officers, Mr. Kavanaugh did not want “to say if he threw the ice or not,” the police report said. (NYT)

The incident was brought to light over the weekend by Chad Ludington, one of Kavanaugh's classmates at Yale, who spoke out about what he felt was a “blatant mischaracterization by Brett himself of his drinking at Yale.”

So, here we are. We’ve gone from unfounded allegations that he was a gang rapist to reports in the "newspaper of record" about Kavanaugh once allegedly throwing ice. These people have no shame.

The New York Times isn't even pretending anymore. The byline for the latest hit piece on Kavanaugh is a woman who stated her opposition to him on July 9.https://t.co/y9b4i9B2ca pic.twitter.com/REadULW4LR

Oh boy, now they got him. Two things the left hates: Kavanaugh and ice. https://t.co/XNeg6Aq1Zx

The @nytimes is now reporting Brett Kavanaugh may have thrown a piece of ice at someone in a Yale bar during college in 1985. This is not satire. This is a real story: https://t.co/XxEEaJhbmn

Are you people aware of what you sound like???