Sen. Hirono: Grassley's Claim That the Committee Reached Out to Kavanaugh Accuser Is 'Bulls***' 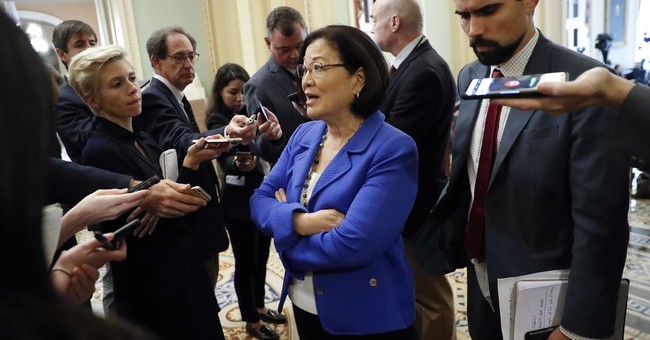 Sen. Mazie Hirono (D-HI) told ABC Wednesday that it was “buls***” that Senate Judiciary Committee chairman Chuck Grassley (R-IA) and Republicans have been doing everything they can to reach out to Christine Blasey Ford, the woman accusing Supreme Court nominee Judge Brett Kavanaugh of sexual assault.

“We’re not consulted at all,” she told ABC, “I would like to have us come together and figure out what is the best way to proceed. Not this seat of the pants stuff, and the latest being a letter from the chairman to the Democrats saying ‘We have done everything we can to contact her.’ That is such bulls*** I can hardly say it.”

Senators weigh in on upcoming deadline for Ford testimony on Kavanaugh allegations:

"She said she wanted to appear, but if she changes her mind and refuses to appear, there's not much we can do," said Sen. John Cornyn. https://t.co/LvTe3kGtgN pic.twitter.com/FMrIkLpe4I

This is such nonsense. The Committee has sent 9 emails and left 2 voicemails. https://t.co/30xsHYFpAk

Grassley sent Democrats on the Senate Judiciary Committee a letter Wednesday in which he explained all the options the committee has given Ford for testifying about an alleged sexual assault that occurred in high school by a drunken Kavanaugh.

"We are doing everything that we can to make Dr. Ford comfortable to coming before the committee in an open session or a closed session, or a public or a private interview," Grassley told reporters. "That's four different ways she can choose to come. So, I'm not worried about anything other than just focusing for the next few days on encouraging her to come."

Sen. Hirono has been very outspoken about the sexual assault allegations against Kavanaugh. At one point, she said men needed to “shut up” about it and do the right thing. She also would like to keep the Supreme Court seat vacant for two years.

Christine Blasey Ford claims that Kavanaugh attempted to rape her at a party in high school. She initially offered to testify before the committee but then claimed that Senate Republicans were planning to have her sit at the same table as Kavanaugh, something Grassley denies. She has since insisted on an FBI investigation into her claims against Kavanaugh.