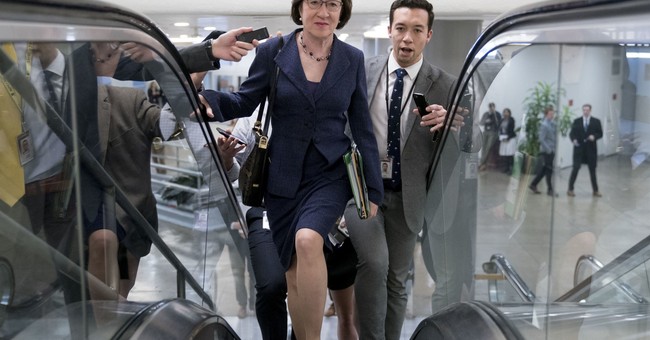 Update: Rep. Swalwell deleted his initial tweet and apologized for diminishing death threats sent to Sen. Collins but also made the excuse that he was just upset that, in his opinion, the "victim's safety has been ignored," in the case of Blasey Ford.

Yes. No one should make threats. This is a democracy: Be loud and be heard. We don’t use violence. I didn’t mean to suggest that. But I’m pissed how this victim’s safety has been ignored and a rush to confirm has been prioritized. Why not offer the witness security? https://t.co/xzds16EuRx

Sexual assault victims deserve respect. And senators shouldn’t be threatened by the public. I said something stupid and minimized ugly behavior. That tweet is deleted and I’m sorry for that.

“My office has received some pretty ugly voicemails, threats, terrible things said to my staff,” Collins said in an interview Wednesday.

“This has been a very ugly process and I think that’s very unfortunate for everyone involved,” she added.

Boo hoo hoo. You’re a senator who police will protect. A sexual assault victim can’t sleep in her home tonight because of threats. Where are you sleeping? She’s on her own while you and your @SenateGOP colleagues try to rush her through a hearing. https://t.co/bnhtkM9HGy

“Boo hoo hoo,” Swalwell responded. “You’re a senator who police will protect. A sexual assault victim can’t sleep in her home tonight because of threats. Where are you sleeping? She’s on her own while you and your @SenateGOP colleagues try to rush her through a hearing.”

Her act a a perpetual victim is wearing thin. She should demand an FBI investig as was done in Anita Hill. https://t.co/gjleJC8krS

Senate Republicans have been trying to accommodate Blasey Ford to testify in whatever way she feels comfortable. However, she and her lawyers have been insisting on a full FBI investigation into the alleged, nearly four-decades-old assault despite the FBI considering the case to be closed.

Rep. Swalwell was called out on Twitter for downplaying the threats Collins was receiving.

Can you imagine the reaction if a GOP Rep. would have tweeted this to a DEM Senator? He's mocking @SenatorCollins for saying she's received death threats. #doublestandard #mediabias https://t.co/1XCcnOC0CX

What a decent human this one is https://t.co/k6CvLlqXkQ

Pretty repulsive that a man is telling a woman not to take seriously the threats she is receiving. Also, did you forget what happened to Steve Scalise? Pretty gross to hear a lawmaker dismiss any claims of violence against a colleague just because she disagrees with his politics. https://t.co/4SAKS0Pczz

Even before the allegations against Kavanaugh were known, Sen. Collins’s office was facing death threats from leftists who wished her to oppose his confirmation as she is a key vote in the process. One caller even threatened to rape her young female staffer.

The left’s campaign to pressure Senator Collins has gone from threats of sexual violence against young staffers to actual sexual harassment.

This is abhorrent behavior and (again) deserves to be roundly condemned from the right and left. https://t.co/XW0xXCtv8h pic.twitter.com/mPU4JuVdoR