Sen. Collins Touts Her Abortion Support, Says She Did Not See 'Hostility to Roe' From Kavanaugh 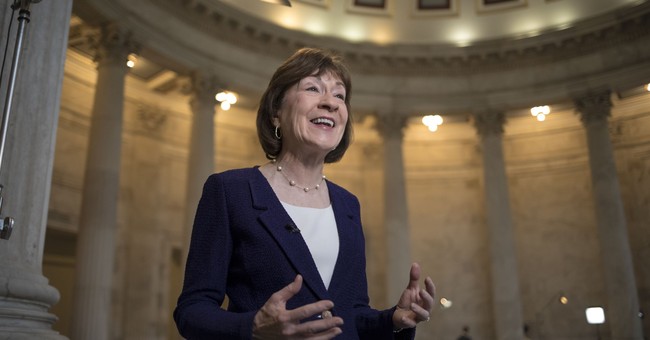 Collins, a “pro-choice” Republican, said that she “was one of two Republicans who voted against an amendment that would have taken away all federal funding for Planned Parenthood … and I think that demonstrates how important I view a woman’s right to choose.”

She was joined in voting against defunding the nation’s largest abortion provider by Sen. Lisa Murkowski (R-AK) along with some “pro-life” Democrats such as Sen. Joe Manchin (D-WV).

Speaking of her meeting with Kavanaugh, Collins said, “I could not support a nominee who demonstrated hostility to Roe. I did not see that with Judge Kavanaugh.”

“I had an excellent meeting with Judge Kavanaugh,” she emphasized. “I asked him many questions covering a wide-range of topics. I started off by asking him whether he had made any commitments to any outside groups, like the Federalist Society or anyone in the White House, including the President, about how he would approach specific cases; and also did he make any commitments on how he would rule. He assured me emphatically that he had not.”

“He was very clear that he believed not just in the precedent of the lower courts,” she said of abortion and other issues, “but recognized the importance of adhering to precedents that the Supreme Court has established itself.”

Sen. Collins did not reveal whether she would be supporting Kavanaugh, saying, “I have learned always to wait before rendering a final decision — or even preliminary decision — until the hearings before the Judiciary Committee have been held.”

Prominent Democrats, led by Senate Minority Leader Chuck Schumer, have adopted abortion groups’ talking points in calling for Kavanaugh to agree that Roe v. Wade was “correctly decided” in order to get confirmed to the Supreme Court. He said the remarks Kavanaugh made to Collins calling Roe “settled law” were a “dodge.”