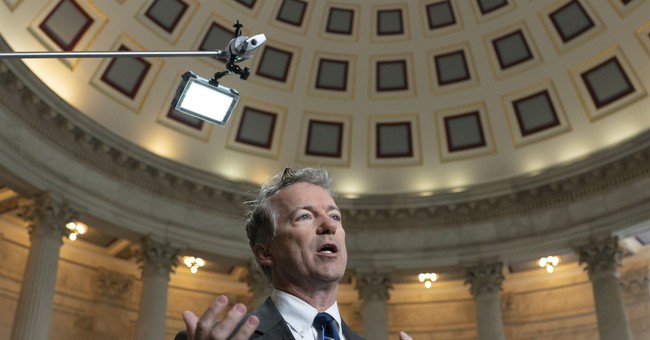 Sen. Rand Paul (R-KY) accused Republicans of paying only “lip service” to the pro-life movement on the Senate floor Thursday after Senate Republican leadership blocked his amendment to defund Planned Parenthood over concerns that it would be a “poison pill” that would prevent the appropriations package for Defense, Labor, Health and Human Services, and Education from passing.

“The dirty little secret is the Republican leadership is blocking my amendment,” Paul said, asking, “What is more important to these Republicans? Saving lives or spending money?”

The Senate allowed a vote on the amendment following Sen. Paul’s speech. However, his amendment failed in a 45-48 vote with a 60-vote threshold and GOP Senators Collins (ME) and Murkowski (AK) joined Democrats to vote against it.

My amendment would end funding to Planned Parenthood, but it is being blocked by... Republicans. pic.twitter.com/7pSE5OgOlV

Big-spending Republicans fear that blocking funding for Planned Parenthood would derail their plans to greatly expand the welfare-warfare state. pic.twitter.com/ddKN6RjjgX

Following my speech calling out those blocking my amendment, the Senate is now holding a vote on my proposal.

Pro-life groups praised Paul for pushing a vote on his amendment and to those who voted in favor of it.

“March for Life is grateful to Senator Paul and to those who voted in favor of an amendment to the appropriations bill that would have banned funding to abortion providers, including Planned Parenthood, nation’s largest abortion provider, and subject of Department of Justice investigation into the trafficking of aborted baby body parts,” Jeanne Mancini, president of the March for life commented.

“Unfortunately, many Senators who claim to be pro-life defied their constituents and the consensus of the American public by giving the abortion industry a pass,” she added. “Almost two-thirds of Americans say they do not want to fund abortion with their tax dollars. Disentangling American taxpayers from the abortion industry is long overdue. Our elected representatives should join the national consensus and put an end to taxpayer funding of abortion, or risk being voted out of office.”