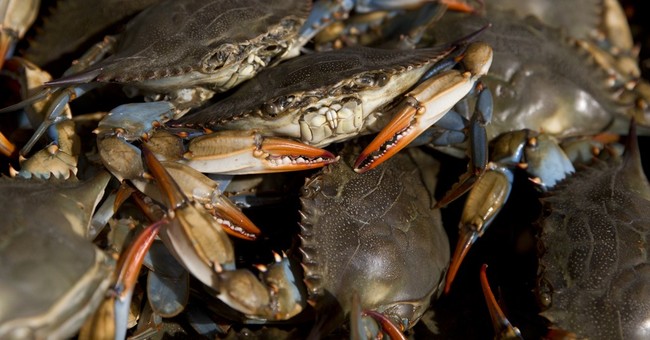 People for the Ethical Treatment of Animals (PETA) put up a billboard in Baltimore’s Inner Harbor featuring a picture of a blue crab with the message “I’m ME, Not MEAT. See the Individual. Go Vegan.”

“Just like humans, crabs feel pain and fear, have unique personalities, and value their own lives,” PETA Executive Vice President Tracy Reiman commented. “PETA’s billboard aims to give Charm City residents some food for thought about sparing sensitive marine animals the agony of being boiled alive or crushed to death in fishing nets simply by going vegan.”

However, Twitter users and locals reacted pretty much as could be expected to PETA’s efforts to get them to stop eating the Maryland specialty.

“I thought it was fake, honestly,” Tony Minadakis, owner of Jimmy’s Famous Seafood told the Baltimore Sun of the billboard. “I was shocked. It was pretty tone-deaf.”

PETA came to Baltimore thinking they were gonna save ...crabs? https://t.co/68Ef6QhScE

Tell me one blue crab ur friends with and I'll stop eating them. https://t.co/Lb4Faj0Faj

?? Believe all kitty colonies (which they call ferals even though 90% are former pets who’ve been dumped) & pit bulls should be euthanized.

?? But eating crabs is evil.

Siri, show me the biggest waste of advertising money you’ve ever seen.

"That was a mistake," a PETA spokeswoman emphasized to them, "It never should have happened. That person is no longer employed by PETA."

There are apparently also hard feelings over PETA’s calls to put an end to the famous annual Chincoteague Pony swim after a horse’s accidental death.

PETA did score a win recently on another important issue for them. Nabisco "freed" animal crackers from circus-themed cage packaging, redesigning the packaging as an African landscape at PETA's request.