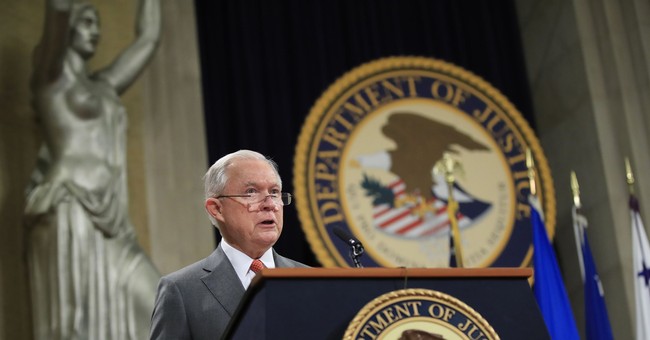 He explained that the task force will help the DOJ to “fully implement” religious liberty guidance issued in a memo last October that outlines 20 fundamental principles for the Executive Branch to follow so they can properly apply religious liberty protections in federal law.

That guidance arose out of President Trump’s executive order last May directing agencies to respect and protect religious liberty.

Sessions said that this new task force will help implement the DOJ’s guidance by “ensuring that all Justice Department components are upholding that guidance in the cases they bring and defend, the arguments they make in court, the policies and regulations they adopt, and how we conduct our operations.”

“That includes making sure that our employees know their duties to accommodate people of faith,” he added.

Sessions emphasized the importance of practicing “what you preach,” saying the DOJ will be remaining “in contact with religious groups across America to ensure that their rights are being protected.”

“We have been holding listening sessions and we will continue to host them in the coming weeks,” he said.

Prior to his announcement, Sessions said that he believed a “dangerous movement, undetected by many, is now challenging and eroding our great tradition of religious freedom.”

“This election, and much that has flowed from it, gives us a rare opportunity to arrest these trends,” he said, adding that, “such a reversal will not just be done with electoral victories, but by intellectual victories.”

Sessions said that, in recent years, “many Americans have felt that their freedom to practice their faith has been under attack.”

“And it’s easy to see why. We’ve seen nuns ordered to buy contraceptives,” he said, referencing the Little Sisters of the Poor’s legal fight against the Obama-era HHS mandate.

“We’ve seen U.S. Senators ask judicial and executive branch nominees about dogma—even though the Constitution explicitly forbids a religious test for public office,” he continued, referencing incidents like Sen. Dianne Feinstein’s grilling of then-judicial nominee Amy Coney Barrett about her Catholic faith. At the hearing, Feinstein said the “dogma lives loudly within" Barrett and that was “of concern.”

“We’ve all seen the ordeal faced so bravely by Jack Phillips,” Sessions added.

Phillips, a baker who objected for religious reasons to bake a cake for a same-sex wedding in a case that went all the way to the U.S. Supreme Court, appeared in a panel following the Attorney General’s remarks.

Sessions argued that President Trump heard the concern that arose from cases like these and that was one reason he won the 2016 election.

“I believe this unease is one reason that he was elected,” he said. “In substance, he said he respected people of faith and he promised to protect them in the free exercise of their faith.

“He declared we would say ‘Merry Christmas’ again,” Sessions added, generating some laughter from the audience.

“Under this administration, the federal government is not just reacting—we are actively seeking, carefully, thoughtfully and lawfully, to accommodate people of faith,” Sessions emphasized. “Religious Americans are no longer an afterthought.”

The new task force represents a continued push by federal agencies under the Trump Administration to actively protect religious freedom. The Department of Health and Human Services Office of Civil Rights announced a Conscience and Religious Freedom Division in January to help "enforce existing laws protecting the rights of conscience and religious freedom."