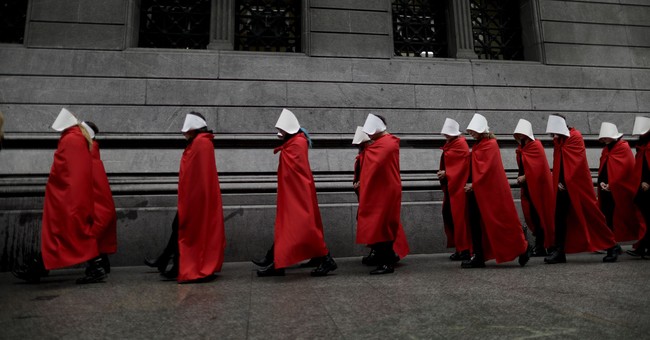 Planned Parenthood hit a snag recently in their repeated attempts to draw parallels between the dystopian book and television drama “The Handmaid’s Tale,” where women are sex slaves in a theocratic regime, and any effort on the part of pro-life advocates to restrict abortion.

Hulu has run Planned Parenthood ads in the past, as recently as June, but Variety reports that they rejected the abortion group’s recent ad which they wanted to run during the show. The ad claims that Trump’s Supreme Court nominee, Judge Brett Kavanaugh, would overturn Roe v. Wade and urges women to “join the fight” to protect abortion.

“We have accepted ads from Planned Parenthood numerous times in the past — as recently as last month — but as a platform that serves millions of viewers with many different viewpoints, we adhere to industry standards on political ads,” Hulu said in a statement. “We are proud of Hulu’s impact in highlighting women’s issues through our original programming and will continue to further that dialogue both inside and outside our company.”

“Hulu’s decision shouldn’t stop Americans from learning about what’s at stake for women and our bodies with Kavanaugh’s nomination, and from calling their senators to oppose his nomination,“ Dana Singiser, Planned Parenthood’s vice president of public policy and government affairs, said in a statement.

“We need to raise the alarm around how Brett Kavanaugh would tip the balance of the Supreme Court against the right to safe, legal abortion in this country,” she told Variety.

“Because this Hulu ad buy was a major part of our SCOTUS ad campaign, we decided to go public with this news,” Planned Parenthood reportedly said to Hulu in an email.

Planned Parenthood performed 321,384 abortions over this past year, according to their latest annual report.