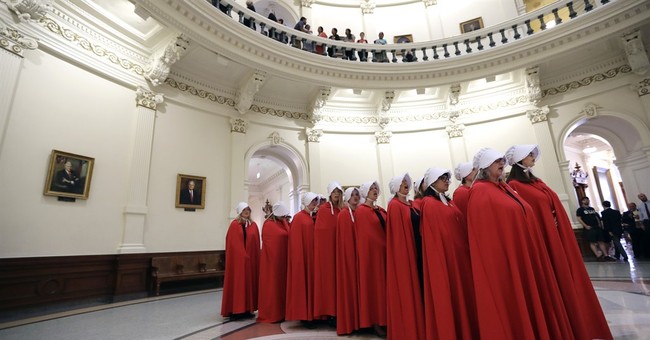 Nowadays implying legislation you disagree with will plunge the U.S. into a dystopian, theocratic regime where women are sex slaves is all the rage with both the media and Planned Parenthood. On Tuesday, Planned Parenthood protestors dressed as “handmaids,” a class of sex slaves from Margaret Atwood’s 1985 dystopian novel The Handmaid’s Tale, claiming to send a message to the GOP Senate about how their healthcare proposal will affect their lives.

The protestors were outside Capitol Hill to speak out against the Senate’s proposed repeal and replacement of Obamacare. It may be noted that even before Obamacare was signed into law in 2010 the United States managed not to be a theocratic regime with sex slaves.

Handmaids are now circled around an anti-GOP healthcare plan rally that MoveOn, PP and others are kicking off pic.twitter.com/kEeBBZ3G5n

Handmaids at the Capitol.
Just before breaking out in dance.
(ht @TaylorLorenz) pic.twitter.com/e48csmHidp

Also outside the Capitol w/ us - Handmaids, making a chilling statement about the GOP #HealthcareBill's cruel policies. #ProtectOurCare pic.twitter.com/LBCxj4XVtl

Fern Whyland communications director at Planned Parenthood Empire State Acts, the group behind the protest, told the Hill that the bill would be “the worst bill for women in generations and decimate women's healthcare. It's a healthcare bill with no healthcare."

"Dressing up as a handmaid gives a clear message to our administration and the Senate about how seriously we take their decisions and how radically it can affect our lives," Elena Lipsiea, one of the protestors dressed as a handmaid said.

This protest is similar to Handmaid's Tale-inspired, NARAL and Planned Parenthood backed protests against pro-life legislation in Missouri and Texas.

The GOP healthcare bill would defund Planned Parenthood, the nation’s largest abortion provider, responsible for 328,348 abortions this past year according to their latest annual report. The abortion giant claims that women will lose essential healthcare if they are defunded, despite Republican claims that funds would be re-allocated to community health centers which would provide care instead.

Planned Parenthood certainly is not spending like an organization terrified of losing money that is needed to provide women essential care. They lost $734,000+ by backing John Ossoff’s failed congressional campaign in Georgia and spent over $38 million in the last three election cycles to elect Democrats.