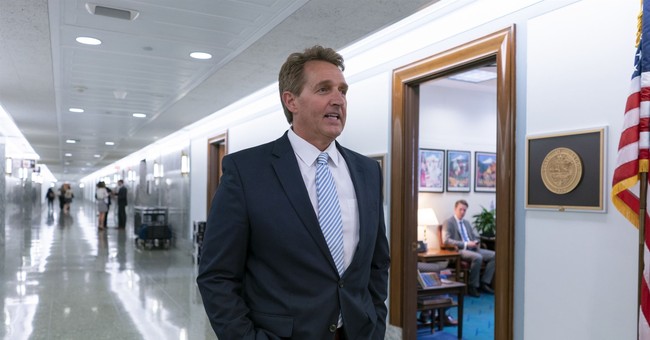 Anti-Trump Republican Sen. Jeff Flake (AZ) announced Wednesday that he will be voting against Gina Haspel’s nomination as CIA Director. Sen. John McCain (R-AZ) has urged his colleagues in the Senate to oppose Haspel due to the enhanced interrogation techniques employed during her time at the CIA.

"While I thank Ms. Haspel for her long and dedicated service to the CIA, as a country we need to turn the page on the unfortunate chapter in the agency's history having to do with torture," Flake said.

Haspel said Tuesday in a letter to Sen. Mark Warner (D-VA) that the CIA should not have undertaken the enhanced interrogation program.

"While I won't condemn those that made these hard calls, and I have noted the valuable intelligence collected, the program ultimately did damage to our officers and our standing in the world," Haspel wrote. "With the benefit of hindsight and my experience as a senior agency leader, the enhanced interrogation program is not one the CIA should have undertaken."

Her reassurances were enough for Warner, who announced his support of her nomination along with Sens. Joe Manchin (D-WV), Heidi Heitkamp (D-ND), Joe Donnelly (D-IN).

Flake, however, said in his statement Wednesday that he still has concerns over Haspel’s role in the destruction of videotapes of interrogations.

"Congress needs to be able to provide fully informed oversight,” Flake said. “My questions about Ms. Haspel's role in the destruction of videotapes relevant to discussions occurring in Congress regarding the program have not been adequately answered."

Haspel addressed some of those concerns last week at her confirmation hearing, explaining that the tapes were destroyed due to security concerns and there was no legal obligation to preserve them.

The Senate Intelligence Committee voted 10-5 Wednesday to send Haspel's nomination for a full floor vote, where it looks as though she will still earn Senate confirmation.