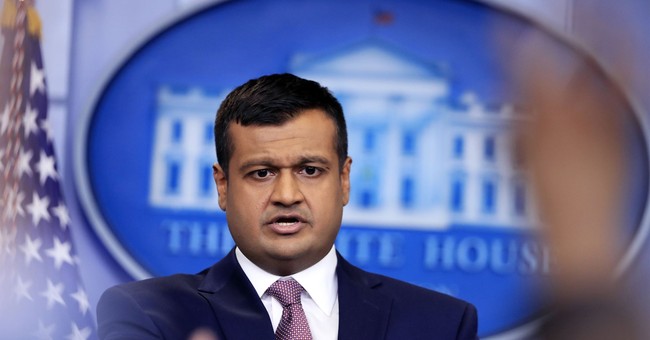 NBC’s Peter Alexander asked White House Deputy Press Secretary Raj Shah Monday about the violence Monday at the Gaza strip in response to the moving of the U.S. embassy from Tel Aviv to Israel.

Alexander quoted a statement from France’s Foreign Minister Jean-Yves Le Drian calling on Israeli authorities “to exercise discernment and restraint in the use of force that must be strictly proportionate.”

The statement was posted in response to the over 50 Palestinian rioters shot by Israeli troops after they got too close to the border fence, marking the deadliest day in Gaza in four years.

CBS reports that "Gaza's Hamas rulers said tens of thousands were expected to head to the border Monday and raised the possibility of large crowds breaking through the fence."

"So, to be clear, Alexander asked, “does the U.S. not agree with the French, that Israeli authorities should exercise discretion and restraint?"

"We believe that Hamas is responsible for what's going on," Shah replied.

"So there's no responsibility beyond that on the Israeli authorities, kill at will?" Alexander followed up.

"What I'm saying is that we believe that Hamas as an organization is engaged in cynical action that's leading to these deaths," Shah answered.

President Trump fulfilled a campaign promise with the opening of the U.S. embassy in Jerusalem. Past presidents have promised the move on the campaign trail but never followed through since the Jerusalem Embassy Act passed in 1995.