Nikki Haley to Russian Ambassador on Weapons Attack Claim: 'In Awe' You Say that 'with A Straight Face' 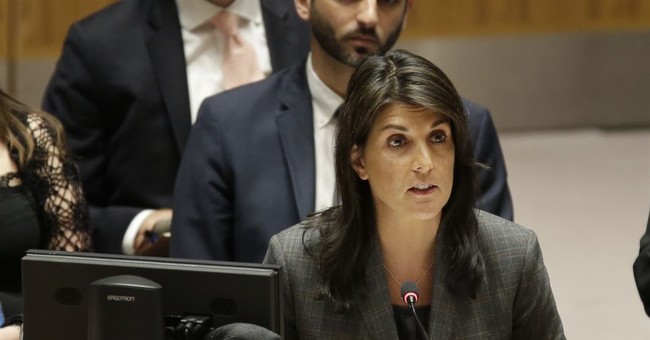 US Ambassador to the UN Nikki Haley slammed Russia Friday for complicity in the recent chemical weapons attack on civilians in Syria. Speaking at a UN Security Council meeting, Haley said Russia was responsible for blocking the UN from taking action to stop the use of chemical weapons. She also departed from her prepared remarks to tell off Russian Ambassador Vassily Nebenzia.

Haley spoke immediately following Nebenzia and criticized his claim before delivering her remarks.

“I started to listen to my Russian friend and respond but instead I’m in awe, Vassily, of how you say what you say with a straight face,” she said, “I really, really am.”

In her remarks, she accused Russia of blocking action that could've prevented the attack in Syria.

“If Russia had lived up to its commitment, there would be no chemical weapons in Syria and we would not be here today,” Haley said. “That is the Russian record of unilateralism. It is a record that has led to the trashing of all international standards against the use of chemical weapons. This meeting should not be about the so-called unilateral threats, it should be about the multiple actions Russia has taken to bring us to this point.”

“Russia can complain all at wants about ‘fake news,'” Haley added, “but no one is buying its lies and cover-ups.”

Haley also said that President Trump "has not yet made a decision about possible action in Syria, but should the United States and our allies decide to act in Syria, it will be in defense of a principle on which we all agree."