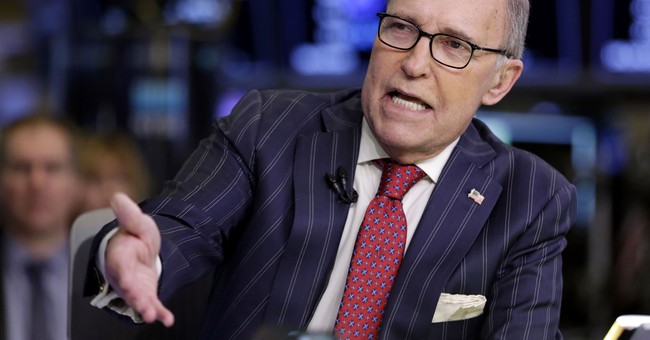 MSNBC host Stephanie Ruhle appeared to question if Larry Kudlow, a long-time contributor and commentator for CNBC who also worked in the Reagan administration, should be discussing “God’s will” as part of his decision to work for the Trump administration.

"If you noticed when Larry Kudlow spoke on CNBC yesterday, he ended by saying, ‘However things work out, it will be God's will,’" Ruhle said Thursday.

"That’s an interesting way to talk about being the national economic adviser to the president," Ruhle said with a confused frown. "God's will?"

She cited a tweet from CNBC’s Washington Correspondent Eamon Javers, who also argued that it indicated a “sense of fatalism” about the job.

Did anyone else key on this comment from Larry Kudlow yesterday as he heads into the tumultuous Trump administration? “However this thing works out, it will be God’s will.”

Ruhle later said that “the challenge” for Kudlow is that “in the position he’s in now he has to stand there and represent real data.”

“The fear is that he may stand there and represent the president in the face of real data,” her co-host Ali Velshi chimed in.

"Well, as Larry Kudlow says, ‘It’s God’s will,’" Ruhle said, lifting up her coffee mug with a smirk.

Kudlow has publicly shared his story of finding a way out of substance abuse and addiction and converting to Roman Catholicism in 1997. He used the phrase God’s will in discussing his difficult decision to leave CNBC.

"The last 25 years of my life has been tied up with CNBC, which changed my life, changed my profession, and it's been a family to me, and, however this thing works out, it will be God's will," he said. "If there's an opportunity when my service is complete, I hope very much to come back and help CNBC. It is my family, and it has changed my life."