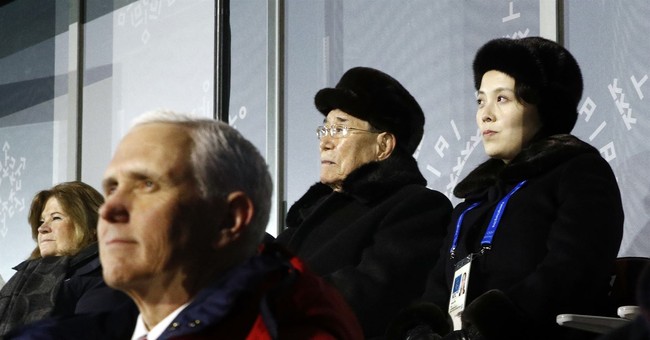 Vice President Mike Pence did not interact with the delegation from North Korea during the opening ceremony of the 2018 Olympics in Pyeongchang, South Korea despite being seated just a few feet from Kim Yo Jong, the sister of North Korean dictator Kim Jong Un.

Just prior to sitting down, Kim Yo Jong shook hands with South Korean president Moon Jae-in, a historic event for the two countries.

White House officials told Politico that Pence and Moon sat together during the opening ceremony to show the strong alliance between their two countries and the vice president chose not to move after sitting near the North Korea delegation.

"We wanted to show the alliance seated together,” the official said. “We wanted the North Koreans to see the vice president, Abe and Moon sitting directly in front of them for the Opening Ceremonies, and it would show that that alliance is strong. At any moment, he could have gotten up and left and sat somewhere else, and then you would have had the imagine (sic) of North sitting in the box with South Korea and Japan. But he stayed there the entire time.”

The official added that Pence and North Korea’s delegation were mutually avoiding interaction and that efforts by South Korea to arrange a meeting between them had been rejected by both sides.

Pence also reportedly avoided North Korea’s delegation at a VIP reception prior to the ceremony.

Earlier this week, Pence did not rule out meeting with North Korea during the games.

“With regard to any interaction with the North Korean delegation, I have not requested a meeting, but we’ll see what happens,” Pence told reporters, according to the Associated Press.