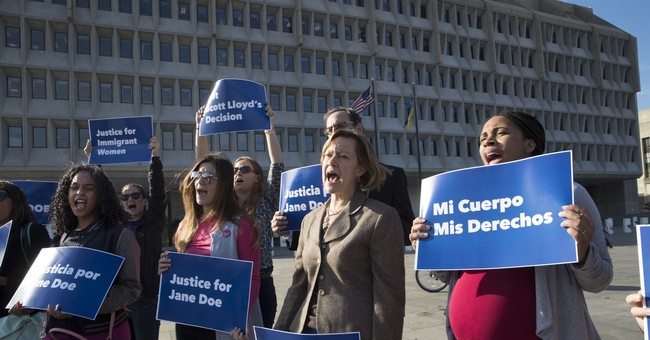 The American Civil Liberties Union filed yet another complaint Thursday against officials at the Department of Health and Human Services (HHS) Office of Refugee Resettlement (ORR) over their refusal to facilitate an abortion for an unaccompanied minor, Jane Moe. This is now the fourth illegal immigrant teen the ACLU has advocated for after the government’s refusal to assist in obtaining their abortions in the U.S.

According to court documents, Jane Moe is a 17-year-old in a government-funded shelter who is in her second trimester of pregnancy. In the court declaration, Moe says she has been asking for an abortion for two weeks and wants one as soon as possible.

The ACLU is seeking not only a preliminary injunction preventing government officials from obstructing Moe’s abortion access but also a permanent injunction against ORR’s policy of refusing to facilitate abortions and compelling minors to go to crisis pregnancy centers.

“The Trump administration is effectively banning abortion for these young women,” Brigitte Amiri, senior staff attorney with the ACLU Reproductive Freedom Project, claimed in a statement. “We’ve already stopped the government from forcing three other ‘Janes’ to continue pregnancies against their will, but clearly, their heartlessness knows no bounds.”

The October case of Jane Doe, another unaccompanied minor who sought and obtained an abortion while in a federally funded shelter, has opened the floodgates for a battle between the Trump administration and the ACLU on this issue. The DOJ filed a Supreme Court petition in the case of Doe in November, arguing that ACLU attorneys misled them as to the timing of her abortion before they had a chance to file an appeal in the case.

Two more immigrant teens, Roe and Poe, were added to the ACLU’s fight against ORR but Roe’s case was dropped when it was revealed she was lying about her age and was not a minor, while Poe’s case was dismissed due to special circumstances cited by the government which they did not name.

ORR told Politico about their policy in October explaining in the case of Doe that they are “providing excellent care to this young woman and her unborn child and fulfilling our duty to the American people,” but “there is no constitutional right for a pregnant minor to illegally cross the U.S. border and get an elective abortion while in federal custody.”

Recommended
Here's What to Expect in the Texas Runoffs and Races in Georgia, Alabama, and Arkansas
Spencer Brown

“We cannot cede our responsibility to care for minors and their babies by releasing them to ideological advocacy groups,” they argued.

“The ACLU is pushing its larger agenda of making the United States a sanctuary nation for abortion," she said. "This shameful ruling must not stand. The Trump administration’s policy is compassionate and consistent with American laws and values, and we hope to see them appeal this decision.”