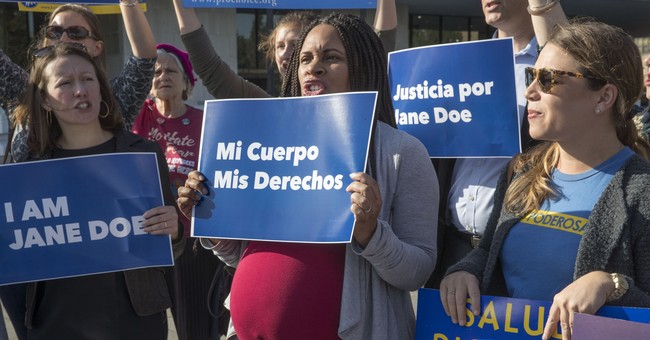 The full D.C. Court of Appeals ruled 6-3 Tuesday that a 17-year-old unaccompanied minor, Jane Doe, must be granted access to an abortion rather than waiting until October 31st to find a sponsor to facilitate the abortion as an appeals court panel had ruled Friday due to federal officials refusing to facilitate the procedure.

The appeals court decided to reinstate an October 18th ruling by Judge Tanya Chutkan, an Obama appointee, who ruled last week that the girl must be transported to an abortion clinic "promptly and without delay." She said federal officials are "restrained from interfering with or obstructing [the teen's] access to abortion counseling or an abortion."

The court cited the dissent by Appeals Judge Patricia Millett in Friday’s ruling as part of their decision. Millett argued that the government’s refusal to facilitate Jane Doe’s abortion was a “grave constitutional wrong.”

In appealing Judge Chutkan’s initial decision, the Department of Justice appealed the decision saying it “sets a dangerous precedent by opening our borders to any illegal children seeking taxpayer-supported, elective abortions.”

Eight attorneys general led by Texas Attorney General Ken Paxton filed an amicus curiae brief on the side of the government in the case.

“No federal court has ever declared that unlawfully-present aliens with no ties to this country have a constitutional right to abortion on demand, they write. “The Court should decline to break that new ground.”

Pro-life groups, including the Susan B. Anthony List, are also warning that allowing the abortion would set a dangerous precedent.

SBA List President Marjorie Dannenfelser called it “a case which would incentivize an abortion-import business for illegal immigrant minor girls in defiance of state laws.”

Dannenfelser commented on Tuesday's ruling that “federal court judges sided with the abortion lobby and its ally the ACLU against true compassion and human dignity."

“The ACLU is pushing its larger agenda of making the United States a sanctuary nation for abortion," she said. "This shameful ruling must not stand. The Trump administration’s policy is compassionate and consistent with American laws and values, and we hope to see them appeal this decision.”

Catherine Glenn Foster, President of Americans United for Life, said her organization “deeply regrets that a federal appeals court has ruled that a judge can order the United States Government to expend its resources to help end a human life, in violation of the principles of the Hyde Amendment."

"This is particularly applicable where, as in this situation, the young woman has had ample opportunity to seek a sponsor and not involve federal resources, so there is no legal or practical reason for this ruling,” she added.

Concerned Women for America President Penny Nance commented on Tuesday’s ruling that “allowing our taxpayers to be entangled in financing and facilitating an abortion for an undocumented teen sets a horrible precedent. We do not want our nation to be known as a place where illegal immigrants can come in order to procure free abortions.”

“And let’s remember that abortion is not health care,” she added. “If we want to talk about providing care for undocumented minors who cross our border, then let’s be honest about the fact that there were two lives that crossed our border. There is a fully formed, unborn baby whose life is on the line here. An ultrasound would show that he or she has easily recognizable fingers, toes, and eyes.”

“We implore the Trump Administration to quickly appeal the decision and pray that Jane Doe changes her mind about having an abortion,” she concluded.

The Justice Department has yet to comment on whether it will appeal Tuesday’s decision to the Supreme Court.