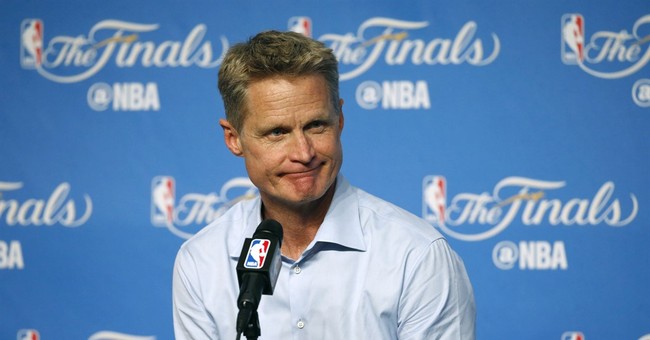 Golden State Warriors’ coach Steve Kerr slammed LaVar Ball and the way ESPN covers news Monday in response to criticism of his friend, Lakers' coach Luke Walton. He said Ball has become the “Kardashian of the NBA” and criticized ESPN’s decision to lay off many of their more substantive writers and focus on stories like Ball’s criticism of Walton.

"Somewhere, I guess in Lithuania, LaVar Ball is laughing at all of us,” Kerr said. “People are eating out of his hands for no apparent reason, other than he's become like the Kardashian of the NBA or something and that sells, and that's what's true in politics and entertainment and now in sports. It doesn't matter if there's any substance involved with an issue, it's just can we make it really interesting for no apparent reason? There is nothing interesting about that story."

Kerr said the coverage of Ball is evidence of a deeper “societal issue” that has started “invading the sports world.”

“(People) must care, or ESPN wouldn’t be spending, you know, whatever they’re spending to send reporters to Lithuania, while laying off people who are writing really substantial (stories),” Kerr continued. “People like (former ESPN NBA writers) Ethan Strauss or Marc Stein are getting laid off, so again this is not a condemnation of ESPN. It’s not. It’s a societal issue, and it’s been going on for many, many years, and it’s — I think — really invading the sports world now.”

Ball criticized Walton from a resort in Lithuanua Sunday, saying “You can see they’re not playing for Luke no more,” according to ESPN. “Luke doesn’t have control of the team no more. They don’t want to play for him.”

LaVar Ball made headlines in November when his other son, former UCLA player LiAngelo Ball and two of his teammates were released from a Chinese prison for shoplifting after President Trump interceded on their behalf. LaVar Ball responded by starting a feud with Trump and downplaying his assistance in the incident.