Gov. Kasich Signs Ohio Law Banning Abortion on the Basis of Down Syndrome 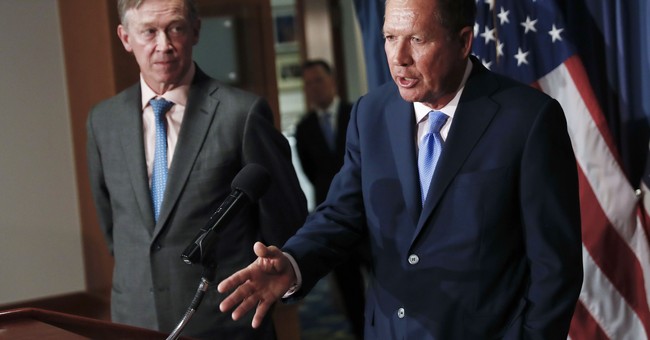 Gov. Kasich (R) signed a law Friday banning abortion on the sole basis of a diagnosis of Down syndrome. This makes Ohio the third state to pass such a law. The new law will take effect sometime in late March.

The legislation makes performing abortions solely on the basis of Down Syndrome a fourth-degree felony. It requires the state medical board to revoke a doctor's license if convicted but does not penalize the woman obtaining the procedure.

Ohio Right to Life President Mike Gonidakis thanked Kasich for signing the bill, saying in a statement, "Ohio is and will continue to be a state that sees the lives of people with Down syndrome as lives worth living, thanks to this legislation."

“Ohio has given unborn children with Down syndrome and their families an early Christmas present and created a safe haven from lethal discrimination,” said SBA List President Marjorie Dannenfelser. “Research has shown that individuals with Down syndrome are among the happiest people in the world and bring tremendous joy to their families – but, tragically, mixed messages from society and many in the medical community target them for abortion at alarming rates.”

“In some Western nations these vulnerable children are even on the verge of being eliminated from society through selective abortion,” she added, “and this is considered ‘progress.’ In a time of growing acceptance of human diversity and rejection of outdated biases against people with different abilities, such extreme intolerance stands out as a great injustice. We thank Governor Kasich and the Ohio legislature for their leadership and hope other states will be quick to follow their example.”

Catherine Glenn Foster, President of Americans United for Life, commented, “Americans United for Life applauds Governor John Kasich and the Ohio Congress for committing to defend the most vulnerable among us by lawfully banning the discriminatory practice of Down syndrome selective abortion. Every human life deserves a chance to thrive. We are heartened to see Ohio join Indiana and North Dakota in setting a pro-life precedent to protect the 85% of unborn Down syndrome children in the United States who are so disproportionately targeted for abortion, and hope it will inspire the rest of our nation to follow suit. ”

NARAL Pro-Choice Ohio Executive Director Kellie Copeland, on the other hand, claims the new law shames women and is part of a larger strategy to restrict abortion access.

"When a woman receives a diagnosis of Down syndrome during her pregnancy, the last thing she needs is Gov. Kasich barging in to tell her what's best for her family," Copeland said in a statement.

Indiana enacted a similar measure before a judge blocked it, an appeal is pending. North Dakota banned abortion on the basis of Down syndrome in 2013, it has gone unchallenged likely due to the fact that the state’s only abortion clinic does not perform abortions after 16 weeks of pregnancy.

The high numbers even caused one human rights group to appeal to the United Nations, calling the abortion rates a “contemporary form of eugenics and racism.”