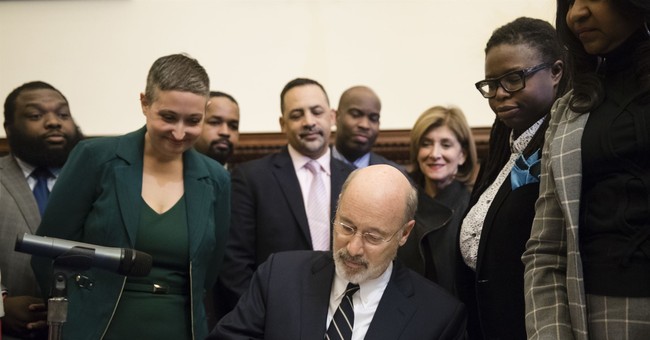 Wolf promised to veto the bill in an op-ed he wrote for the Philadelphia Inquirer after it passed the House last week by a 120-70 vote and the Senate in February by a vote of 32-18.

He called the bill “the most restrictive anti-choice bill in the country” saying it was an “assault on the doctor-patient relationship by politicians without medical or health expertise.”

“Unbelievably, this cruel legislation bans abortion after 20 weeks and provides no exceptions for rape or incest,” he said. “This bill criminalizes a medical procedure that doctors use to protect the life of the mother when tragedy strikes during a pregnancy.”

The United States is one out of just seven countries to allow elective abortions after 20 weeks, as The Washington Post confirmed in October. Republicans are attempting to pass a 20 week abortion ban nationally pointing to evidence such as five-year-old Micah Pickering who survived being born at just 22 weeks gestation.

Wolf said at a news conference that the bill “is an attack on women. It’s an attack on their health, their freedom, their choice, their liberties.”

Greg Manz, spokesman for the Pennsylvania Republican Party told the Philadelphia Inquirer that “Tom Wolf is a puppet of Planned Parenthood, the nation’s number one provider of abortions, and is going to gladly accept their special-interest money for more political favors.”

“This bill would threaten women’s safety and punish doctors for using their best medical judgment,” Planned Parenthood president Cecile Richards said in a statement on Wolf’s veto. “As recent events in Pennsylvania show, it’s essential that we continue to elect champions who will protect women’s access to safe, legal abortion. Each of us deserves the opportunity to control our lives at the most basic level: our bodies, our families, and our life’s path, including whether and when to become a parent.”

Republicans in the Pennsylvania legislature don’t appear to have the two-thirds majority needed to override Wolf’s veto.

Pro-life groups are angered by the veto of legislation that they consider to be pretty common sense.

“Not only did this legislation provide protections for the unborn child who can feel pain, but it would also have protected mothers from the increased risks associated with later term abortions," he added. "Research shows that a woman seeking an abortion at 20 weeks (five months) is 35 times more likely to die from an abortion than she was in the first trimester. This risk continues to increase exponentially as the pregnancy progresses, due to both the development and growth of the unborn child, as well as the physical changes a woman’s body undergoes in preparation for delivery. We urge the citizens of Pennsylvania and members of the legislature to continue to fight for legislation that protects both mothers and their unborn children from the harms of abortion.”