George Clooney Admits Clinton's Failings as a Candidate: 'I Never Saw Her Elevate Her Game' 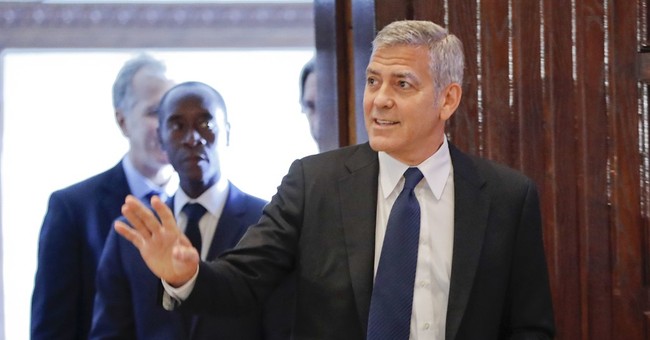 Actor and staunch Hillary Clinton supporter George Clooney recently admitted in an interview with The Daily Beast that Clinton was far from perfect as a candidate. He insisted that she was “incredibly qualified” for the job but acknowledged that she was “not good at communicating things.”

While Clooney said that Hillary Clinton was the “right person to side with,” he added that "it was frustrating because I never saw her elevate her game. I never saw it. And I had a lot of liberal friends who were like, ‘She’s not good at this.’ And I see that, and I understand it.”

“Here’s what I mean,” he explained. “She was more qualified than even her husband was when he was elected president, but she’s not as good at communicating things. That’s simply true.”

“When she got up and gave a speech, it didn’t soar,” he admitted, but emphasized that “that doesn’t mean that she wouldn’t have done a great job as president, and I supported her because by the time we did the fundraiser the primary was over at that point.”

Clooney hinted that sexism may have played a role in Clinton’s defeat saying, “if it was a guy it wouldn’t have been so polarizing. I think the fact that she’s a woman made it a much harder uphill battle.”

“I think that she wasn’t particularly good at articulating the things that she wanted to do,” he concluded, “and unfortunately we live at a time right now where articulating what you want to do is more potent in the electorate than the other way around, obviously, when Trump only said he was going to ‘Make America Great Again.’ Don’t you think the next Democrat who runs should just run with a blue hat that says, ‘Make America Great Again?’”

Marlow Stern of The Daily Beast asked Clooney about Trump’s attacks on CNN, claiming that “CNN is the network—more than any other network—that perhaps helped the most in getting Trump elected,” since “they had about eight Trump surrogates in regular rotation, and aired his rallies start-to-finish.”

Clooney defended the media saying that while CNN “enjoyed putting him (Trump) on the air,” Jake Tapper’s coverage has been good and “watch how good The New York Times, Washington Post, and even The Wall Street Journal have now taken their jobs, and watch how the other arms—the legislative branch, the judicial branch—they’re taking hold, and I’m optimistic. I feel that, well, with the exception of the one thing the president can do by himself, which is push a button, the checks and balances are starting to take hold. And I’m excited by that.”

“As far as George Clooney is concerned, let’s put it this way — he’s no Cary Grant,” Trump said in an interview at the time.