Trump Jr. Wanted to Meet with Russian Lawyer to Obtain Info on Clinton's 'Fitness' for Office 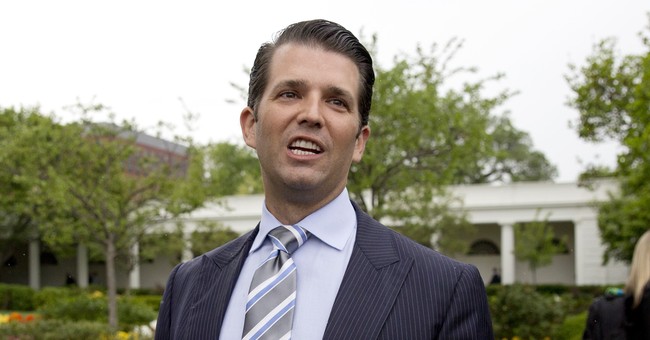 Donald Trump Jr. met behind closed doors with Senate Judiciary Committee staff Thursday to speak about his June 2016 meeting with Russian attorney Natalia Veselnitskaya at Trump Tower. Democrats have argued that this meeting may have been a part of collusion between the Russian government and the Trump campaign, a charge Trump Jr. denies.

The New York Times obtained a copy of the statement Trump Jr. gave Senate investigators Thursday in which he said that in the 2016 meeting he had wanted to at least hear out “information concerning the fitness, character or qualifications of a presidential candidate.”

“To the extent they had information concerning the fitness, character or qualifications of a presidential candidate, I believed that I should at least hear them out,” he said. “Depending on what, if any, information they had, I could then consult with counsel to make an informed decision as to whether to give it further consideration.”

He also said he had reservations about the proposal, describing Rob Goldstone who arranged the meeting as a “colorful” music promoter whom he knew through the son of a Russian oligarch. Goldstone had asked Trump Jr. to take the meeting saying it would include potentially damaging information about Clinton.

“Since I had no additional information to validate what Rob was saying, I did not quite know what to make of his email. I had no way to gauge the reliability, credibility or accuracy of any of the things he was saying,” he said.

“As it later turned out, my skepticism was justified. The meeting provided no meaningful information and turned out not to be about what had been represented,” he concluded.

Trump Jr. had come under fire for his email response to Goldstone, which he released himself following a New York Times report, in which he responded to Goldstone’s promise of damaging Clinton info with, “I love it.”

“As much as some have made of my using the phrase ‘I love it,’ it was simply a colloquial way of saying that I appreciated Rob’s gesture,” he said in his Thursday statement.