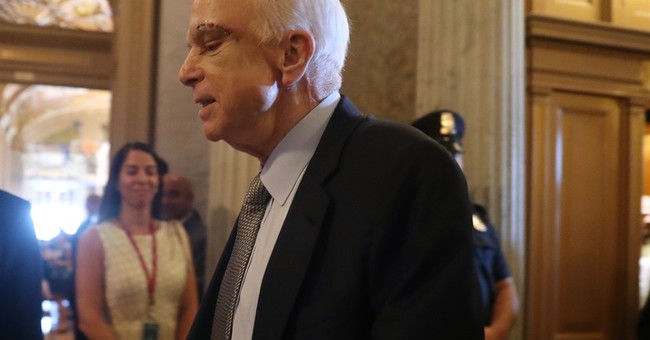 MSNBC’s Joy Reid, Ilyse Hogue of the abortion advocacy organization NARAL, and blue checkmark Twitter in general showed Tuesday that they have no problem not only personally targeting someone with brain cancer who has just been through a major surgery but also using his illness as a talking point against him.

Hogue tweeted Tuesday that maybe McCain’s “recent life experience will give him empathy to do right thing,” as he bravely returned to the Senate floor visibly scarred from his recent surgery with a brain cancer diagnosis to vote yes on the debate on the GOP health care bill.

.@SenJohnMcCain now holds fate of millions in his hands. Maybe his recent life experience will give him empathy to do right thing.

MSNBC’s Joy Reid tweeted out a story about Ted Kennedy advocating for universal healthcare despite brain cancer saying “One left his sick bed to vote to provide healthcare to millions. The other may be returning to work from his sick bed to take it away.”

Matthew Yglesias wrote that it was “Inspiring to see McCain risk his health so that millions could some day experience the unique freedom that comes from having no insurance.”

Inspiring to see McCain risk his health so that millions could some day experience the unique freedom that comes from having no insurance.

Many, many others cruelly targeted McCain over his vote in light of his severe diagnosis because they disagreed with his position on the healthcare bill.

I don't want to hear another fucking word about John McCain unless he dies or does something useful for once https://t.co/cV5tp5fB2M pic.twitter.com/2bMdaCY86B

Will cancer-stricken @SenJohnMcCain help a draft-dodger who called him a loser take health care from millions? Then this will be his legacy.

John McCain left hospital stay paid by taxes on flight paid by taxes to remove health insurance from taxpayers. And we paid him to do it.

sure john mccain is an american hero. he also gave us sarah palin and flew back from brain surgery to take healthcare away from millions

Ted Kennedy fought cancer while trying to ensue healthcare for all.

John McCain fights through cancer to take healthcare from millions.

John McCain is a hero to millions of Americans who want their premiums doubled & their kids' bone cancer to be a pre-existing condition.

john mccain voted to proceed with a bill that would probably kill him if he wasn't worth $21 million. this is totally neat and fine.