Pence: 'Day Will Come' When Trump Delivers on Promise to Move U.S. Embassy to Jerusalem 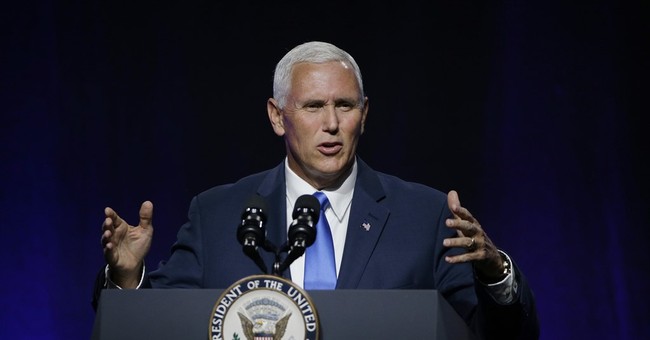 Vice President Mike Pence promised that “the day will come when President Donald Trump moves the American Embassy from Tel Aviv to Jerusalem,” in a speech he made to Christians United for Israel Monday evening.

“To the men and women of Christians United for Israel, this president hears you. This president stands with you,” Pence said. “And I promise you that the day will come when President Donald Trump moves the American Embassy from Tel Aviv to Jerusalem. It is not a question of if, it is only when.”

Pence referenced Trump’s recent visit to Israel saying, “standing in Jerusalem, in that ancient and holy city, our president declared for all the world to hear that under his leadership the United States of America ‘will always stand with Israel.’”

President Trump was the first sitting U.S. president to visit the Western Wall.

“President Trump and I stand with Israel for the same reason every freedom-loving American stands with Israel: because her cause is our cause, her values are our values and her fight is our fight,” Pence emphasized.

On the campaign trail, Trump promised in a speech to the American Israel Public Affairs Committee to "move the American embassy to the eternal capital of the Jewish people, Jerusalem."

However, Trump delayed the move in June. According to a White House statement, "President Trump made this decision to maximize the chances of successfully negotiating a deal between Israel and the Palestinians, fulfilling his solemn obligation to defend America's national security interests. But, as he has repeatedly stated his intention to move the embassy, the question is not if that move happens, but only when."