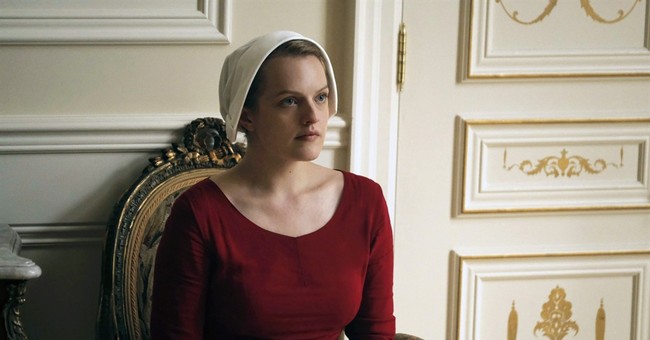 Many in the media and the feminist movement seem to think that we are living in Margaret Atwood’s dystopian 1985 novel The Handmaid’s Tale, judging by the amount of comparisons to Trump’s America that have been cropping up.

A chilling thought indeed given that Atwood’s republic of Gilead is a brutal theocratic regime where fertile women are forced to be “handmaids” or sex slaves to powerful men.

A group of protesters in Missouri really took the comparison to heart and marched through the Missouri Capitol Wednesday dressed in handmaids’ costumes holding signs reading “Don’t let Missouri become Gilead” to protest a pro-life budget amendment which would bar the Missouri Women’s State Funded Health Services Program from covering care at clinics that offer abortion.

Planned Parenthood and NARAL affiliates in Missouri tweeted videos and images from the protest.

#HandmaidsTale in the House, wondering why hats are allowed on the floor today but not theirs #moleg #PraiseBe pic.twitter.com/7PhAMzTnaL

The protest was partially inspired by a similar event in Texas in March where women dressed up as handmaids and sat in the Texas Senate chambers to protest abortion restrictions, like a ban on second trimester abortions that dismember “the unborn child and extracts the unborn child one piece at a time from the uterus through the use of clamps, grasping forceps, tongs, scissors, or a similar instrument.”

Apparently not having access to abortion procedures like that and not having the option of state funded coverage at clinics that offer abortion is comparable for these protestors to living as sex slaves in a theocratic regime. Go figure.