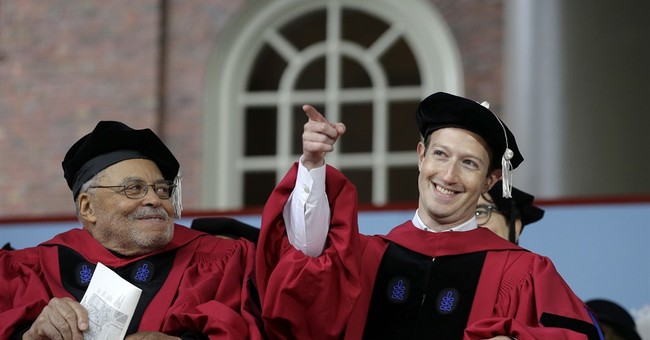 Facebook founder and CEO Mark Zuckerberg returned to Harvard Thursday to receive an honorary doctoral degree and delivered a speech which he has posted the full text of on Facebook. Zuckerberg took the opportunity to blame “wealth inequality” for hurting the entrepreneurial spirit and advocated exploring “ideas like universal income.”

“We have a level of wealth inequality that hurts everyone,” he argued. “When you don't have the freedom to take your idea and turn it into a historic enterprise, we all lose. Right now our society is way over-indexed on rewarding success and we don't do nearly enough to make it easy for everyone to take lots of shots.”

“There is something wrong with our system when I can leave here and make billions of dollars in 10 years while millions of students can't afford to pay off their loans, let alone start a business,” he continued.

“We all know we don't succeed just by having a good idea or working hard,” he claimed. “We succeed by being lucky too.”

“If I had to support my family growing up instead of having time to code, if I didn't know I'd be fine if Facebook didn't work out, I wouldn't be standing here today,” he said. “If we're honest, we all know how much luck we've had.”

“It's our time to define a new social contract for our generation,” he said.

“We should explore ideas like universal basic income to give everyone a cushion to try new things. We’re going to change jobs many times, so we need affordable childcare to get to work and healthcare that aren't tied to one company. We're all going to make mistakes, so we need a society that focuses less on locking us up or stigmatizing us. And as technology keeps changing, we need to focus more on continuous education throughout our lives.”

He also reportedly teared up at one point recounting an interaction in a class he taught with a high school student that was in the country illegally.

"He wasn't sure if the country he calls home, the only one he's known, was going to deny him his dream of going to college" because of his immigration status, Zuckerberg lamented.

"I can't even say his name because I don't want to put him at risk" of deportation, Zuckerberg added.