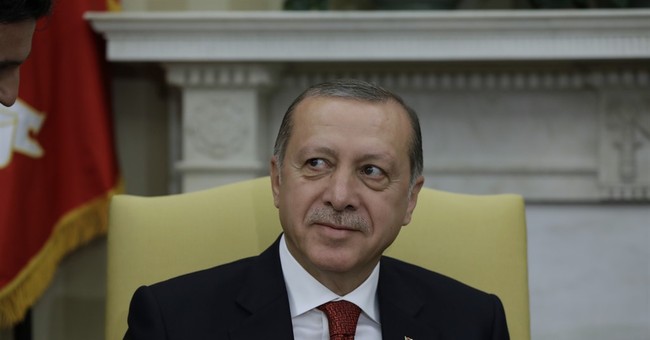 A new video, taken by VOA Turkish and released Thursday, shows Turkish President Recep Erdogan calmly observing as his bodyguards violently attacked protestors outside the Turkish embassy in an incident that resulted in the hospitalization of nine people.

The video shows Erdogan emerging from his car and pausing to watch the clash between his security detail and the roughly two dozen protestors that had gathered outside the embassy Tuesday.

The State Department said Wednesday that they were “concerned” by the violence outside the embassy.

“Violence is never an appropriate response to free speech, and we support the rights of people everywhere to free expression and peaceful protest," State Department Spokeswoman Heather Nauert said in a statement. "We are communicating our concern to the Turkish government in the strongest terms possible."

Lawmakers have also expressed outrage over the incident. Rep. Ed Royce (R-CA) has called on the Trump administration to see if charges are warranted against Erdogan’s bodyguards.

Senators John McCain (R-AZ) and Dianne Feinsten (D-CA) told Erdogan in a letter Thursday that "actions of your staff violate the constitutional protections of freedom of the press and freedom of assembly enjoyed by all Americans."