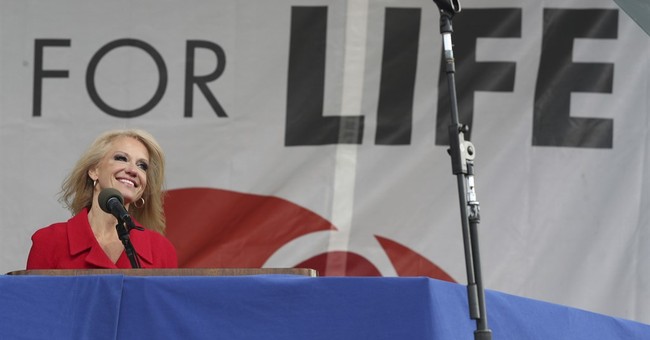 Kellyanne Conway, Counselor to President Donald Trump, told Townhall Wednesday evening that “the first few months of the Trump-Pence administration should give great heart and comfort to pro-lifers nationwide.”

Conway spoke with Townhall prior to her remarks at the 10th anniversary "Campaign for Life" gala in Washington, D.C. held by Susan B. Anthony List, an organization that advocates for pro-life legislation.

Townhall asked what her message would be to those in the pro-life movement who might be discouraged by how long it’s taking to accomplish their long-time goal of defunding the nation’s largest abortion provider, Planned Parenthood.

In reply, Conway highlighted the pro-life policy accomplishments of the Trump administration.

“On day two the President made good on his promise on the Mexico City policy,” she said. “He sent his Vice President and Counselor to the March for Life with a very distinct message that we hear you, we see you, we stand with you and we walk with you.”

“He since then has signed into law a bill that tells states they can opt out of funding Planned Parenthood or other places that provide abortive services,” she continued, “and the healthcare legislation would shift over money from those types of centers to federally qualified women’s health centers that provide an array of health services for women without the abortion services.”

“So it’s a very exciting time,” Conway concluded, “and I think the capper of all of it is having Justice Gorsuch confirmed to the Supreme Court in those first 100 days. He’s got a solid record on life, respecting life, and advancing the sanctity of life.”

Pence told the crowd that they had a “president in the Oval Office who’s fighting every day I promise you, fighting every single day to restore the sanctity of life to the center of American law.”

“Even before day one of the administration, President Trump has also been keeping his promises to stand for life,” he emphasized. “The President knows that personnel is policy, that’s why he literally filled this White House and federal agencies with pro-life leaders.”

He referenced Trump’s recent appointment of Charmaine Yoest, former president of Americans United for Life, to a key post at the Department of Health and Human Services and received cheers from the audience.

"When we vote to repeal and replace Obamacare we will finally vote to defund Planned Parenthood," Pence said, receiving a standing ovation from the crowd.