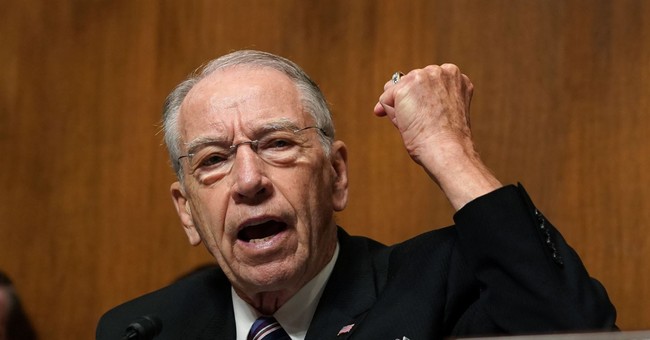 Iowa Sen. Chuck Grassley (R), along with 10 of his GOP Senate colleagues, sent letters – one to Department of Education Secretary Miguel Cardona and one to Attorney General Merrick Garland – inquiring about communications with the National School Boards Association that led to the association's Sept. 29 letter to the White House comparing parents to domestic terrorists.

This comes after emails obtained by nonprofit group Parents Defending Education revealed that Education Secretary Miguel Cardona solicited the NSBA letter, with NSBA Secretary-Treasurer Kristi Swett telling a colleague in an email from early October that NSBA's interim executive director at the time, Chip Slaven, "told the officers he was writing a letter to provide information to the White House, from a request by Secretary Cordona."

The Education Department has denied that Cordona sought the letter from the NSBA.

The Senate Republicans letter to Cardona says that the NSBA's letter was "the proximate cause of Attorney General Garland issuing a memorandum on October 4, 2021 directing the FBI and the various U.S. Attorneys to focus on harassment, intimidation, and threats of violence directed at school officials."

"That action by Attorney General Garland has created a dramatic chilling effect on parents throughout the country and is an inappropriate deployment of federal law enforcement," the letter continues.

The Republican Senators said that reports showing Cardona solicited the NSBA letter "makes the case" that the secretary "played an instrumental role in starting these events."

The lawmakers wrote to Cardona that the emails revealing his involvement in the NSBA's letter are "extremely concerning."

"It appears that you, the Secretary of Education, instructed a trade association to write a letter to the President of the United States so that the Attorney General might have the requisite cover to deploy federal law enforcement in a manner so as to scare American parents out of speaking freely at school-board meetings and petitioning their local governments," the GOP senators said in their letter.

And in the letter to Garland, the senators noted that the NSBA's letter was the "proximate cause" behind the Justice Department's Oct. 4 memo directing the Federal Bureau of Investigations to handle threats against school officials.

"We now have reason to believe personnel at the NSBA coordinated its September 29 letter with, or acted at the behest of, the sitting Secretary of Education, as well as White House personnel — in a letter that asks for the PATRIOT Act to be used against American parents," the letter to Garland reads.

The lawmakers also referenced a "one-page" response to their two previous inquiries into the DOJ's memo that was signed by acting Assistant Attorney General Peter S. Hyun. They wrote that Hyun's Dec. 22 response was "incomplete."

"It points to statements from your October 4 memorandum discussing how spirited debate is protected by the First Amendment and that it is the Department of Justice’s job to ensure the safety of all Americans, but frankly those issues were not the focus of our two letters to you on this matter," the Republicans wrote. "Rather, we asked you to withdraw your October 4 memorandum because of the chilling effect it has on the speech of American parents."

"By involving the National Security Division and the Counterterrorism Division of the FBI in local matters, you have created widespread fear that the national security apparatus of the United States is keeping tabs on them," they continued.

Previous emails obtained by Parents Defending Education revealed that the NSBA had correspondence with the White House and Justice Department weeks prior to officially sending the letter to the president. The White House denied involvement in crafting the letter.

The NSBA has since apologized to its members for the language used in its September letter that equated parents speaking out at school board members to a "form of domestic terrorism and hate crimes." However, the DOJ has yet to retract its memo.