Biden Admits to Being Blinded by Rapid Taliban Takeover 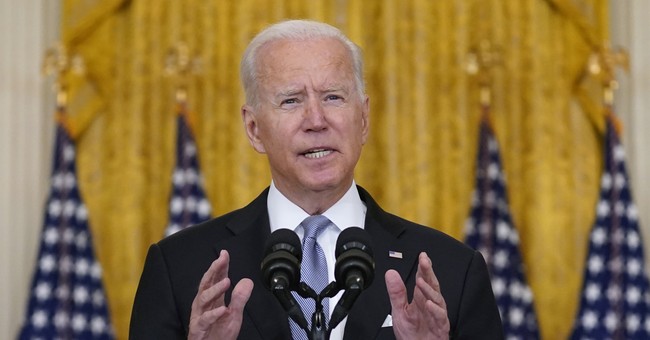 President Joe Biden admitted during his speech Monday that he was caught off guard by how fast the Taliban took over Afghanistan after his decision to evacuate U.S. troops from the region.

The president acknowledged that "there was never a good time to withdraw U.S. forces" but said that he stands behind his decision.

"The truth is this did unfold more quickly than we anticipated," Biden said.

The president then called out Afghanistan President Ashraf Ghani for fleeing his country for Tajikistan on Sunday as the Taliban continues to take over and for not being prepared for the departure of U.S. troops.

Biden emphasized that while the U.S. "planned for every contingency," Americans should not be standing up for a country that refuses to protect themselves.

"The Afghan military collapsed, sometimes without trying to fight," he continued. "If anything, the developments in the past week reinforced ending that U.S. military involvement in Afghanistan now was the right decision. American troops cannot and should not be fighting in a war and dying in a war that Afghan forces are not willing to fight for themselves."

Biden emphasized that the U.S. will continue its efforts to advocate for the human rights of Afghan civilians.

This comes after Biden said Saturday that the U.S. military remaining in Afghanistan would not have made a difference if the Afghan military does not stand up for its own country.

The president also said Monday in a tweet that U.S. troops were only deployed to Afghanistan to take out al Qauda and those responsible for 9/11.

We went to Afghanistan almost 20 years ago with clear goals: get those who attacked us on September 11, 2001—and make sure al Qaeda could not use Afghanistan as a base from which to attack us again.

We did that—a decade ago.

Our mission was never supposed to be nation building.