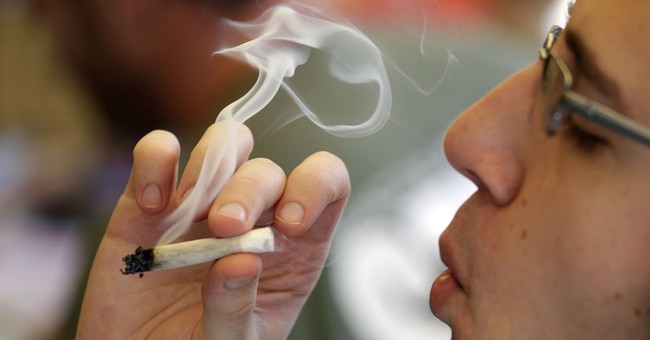 Washington state's program to offer free marijuana joints to residents after they receive a COVID-19 vaccine has proven to be unsuccessful as cannabis providers are battling hurdles.

Washington state announced Monday that the Liquor and Cannabis Board would allow those 21 and older who received the COVID-19 vaccine to claim a free pre-rolled joint this week in an effort to increase statewide vaccinations, as Townhall previously reported.

The state's nearly 500 licensed marijuana retailers were permitted to host vaccine clinics and offer residents a free joint upon receiving the COVID shot.

Marijuana has been legal in the state since 2012 and began regulating such sales in 2014. However most legal pot shops will not participate in the "Joint for Jabs" promotion, despite their desire to partake in the program, over fears of reduced funding because the drug is still illegal at the national level, the Associated Press reported.

Kelli Hawkins, a spokesperson for Spokane Regional Health District, a public health agency that had not yet been approached by cannabis shops, said, according to the AP:

We would not be able to provide vaccine because of concerns about federal funding.

Other cannabis providers do not not have adequate space in their businesses to host vaccination clinics.

The board has previously offered alcoholic products to Washington state residents as a vaccine incentive as well.

Aaron Pickus, a spokesman for the Washington CannaBusiness Association, an industry group, said, according to the AP:

We’re hearing from retailers that they want to be a part of this. Why can’t we do this like the wineries and breweries did it?

The requirement that vaccination clinics be hosted by retailers is a result of people not being allowed to consume cannabis at licensed retailers, which is not the case for alcohol at a liquor store, according to board chair David Postman, who feared that people could receive an abundance of free joints from different stores, which could be given to underage residents, if the vaccinated adults were only expected to provide proof they received their shot.

Postman also highlighted that the board would be offering tax breaks for cannabis shops participating in the promotional program. Alcohol providers were not given the same incentive for participating.

Arizona, who recently announced they would offer free marijuana joints or gummy edibles to residents 21 and older who receive a dose of the COVID vaccine, is the only other state to implement a similar promotion to Washington state.