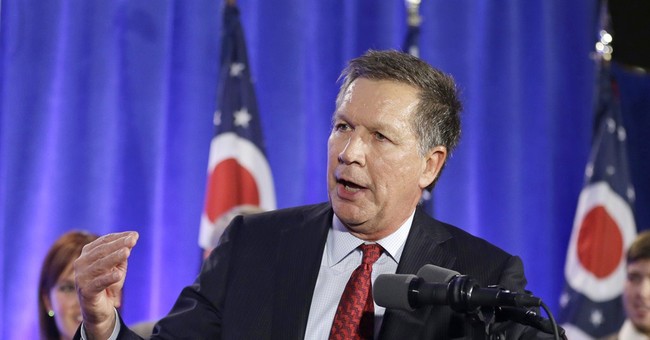 Ohio Gov. John Kasich is on tour in the west promoting a constitutional balanced budget amendment - but before you make any presumptions, the former GOP-nomination-chaser says it isn't about 2016.

As the Wall Street Journal reports:

Fresh off his inauguration to a second term as governor, Mr. Kasich is travelling from South Dakota to Wyoming to Idaho in a tour that ends Friday. He is trying to round up support for a constitutional amendment requiring a balanced federal budget — even as fiscal issues seem to be fading in Congress.

Mr. Kasich, who ran briefly for the GOP presidential nomination in 2000, says this budget campaign has nothing to do with his thinking about whether to try again in 2016. The tour may help build his national profile in a field crowded with ambitious Republicans, but he deflects questions about his plans.

“My options are on the table but I don’t have any more to say about that,” he said. When someone in Pierre, South Dakota raised the question, he joked about other Republicans who are eyeing a bid: “They are all in New Hampshire and here I am in South Dakota!”

Kasich won re-election in Ohio in 2014 by an impressive margin - more than 30 points - and such a strong showing in a purple state suggests an across-the-aisle appeal that would theoretically be helpful in any national election. Still, he's largely a dark horse in a race that is, to this point, led by household names like Bush and Romney.

Feminist Writer Finally Says the Quiet Part Out Loud Regarding Abortion
Townhall
People have thoughts about 'terrifying' videos of truck driver who 'ran down peaceful protesters' in Iowa
Twitchy
The Decision to Overturn Roe Shows That Chief Justice John Roberts Has Lost the Confidence of the Court's Conservative Majority
Redstate
Could AOC Be Getting a Little 'Insurrectiony' With Her New Revolutionary Friend?
PJ Media