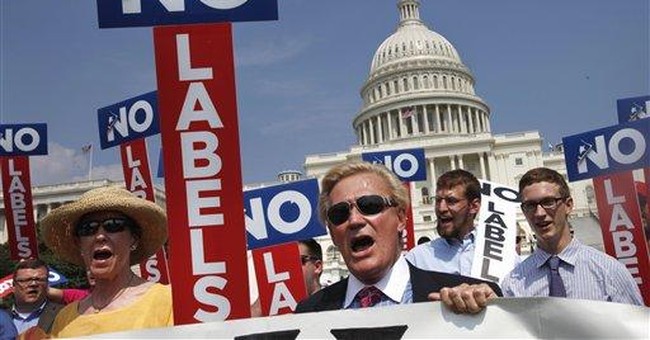 Your daughter asks you to meet her in the kitchen one Sunday afternoon. You arrive. She's dead serious. She asks you to sit down across from her, and she takes your hand.

"You know I love you and respect you, right?" She says. "And I hope you'll always love and respect me." Your brow furrows. A light bead of sweat materializes on your forehead.

"Dad, I went down to the board of elections. I've registered with the Republican party."

Let's say you're a strident liberal. What in the world do you think of your daughter?

There's a saying you might have heard that goes something like this: liberals think conservatives are evil, but conservatives think liberals are just wrong, and it comes to mind when reading this Jonathan Chait piece:

I consider Republicanism a negative factor in a potential in-law. That is not the only ideological objection. I would likewise bring healthy skepticism to a Marxist, anarchist, radical Islamist, monarchist, or advocate of Greater Russia. That goes for advocates of belligerent, hypernationalism of any kind — though, come to think of it, most belligerent hypernationalists you run into in this country happen to be Republicans.

It’s okay to judge people’s political values. It’s not like the sports team you root for or even (exactly) like a religion, where you are mostly born into your loyalty. Politics expresses moral values.

Chait is jumping off of a polled-attitudes survey that says that Americans are now more likely to view ideology and partisanship as larger divides when it comes to dating than race. Let's say this: that's unabashedly a good thing. It's the embodiment that we judge each other not by the color of our skin but by the content of our character. But how much should ideology matter in our interpersonal dealings in general?

It's why it's important to pull Chait's son-in-law test one step closer, and why he's wrong that it's unlike one's sports team or religion. Our opinion of our kin's moral character should be as affected as if they told us they were changing religion, or had a different sports team allegiance. Political party is no more a proxy for moral character than religion or sports team. I'd be disappointed if my child grew up a Nats fan (rather than an Astros fan) but it would be so inconsequential to my feelings toward my child that it wouldn't really bear mentioning at all. (Caveat: I do not have children, so, er, grain of salt.)

It'd be the same if my child turned out to be a liberal. Liberals are, by and large, good people. I am related to a few of them! Their ideology is not noteworthy in the least if I were to discuss their moral character. And this would certainly go for anyone they'd choose to marry, as well.

What would be noteworthy? A lot of common sense things: a refusal to treat strangers with kindness and dignity, never working for charity, a selfish attitude that subjugates the feelings of others - it's complicated to define what makes a bad person. Party allegiance is so low on the list of what defines good and bad that it might as well be sports allegiance or religion.

Ah, but a partyist might say, party identification is a good proxy for all those things, and in lieu of knowing more about a stranger, it's perfectly fine to render judgment! Republicans, as we all know, tend to be selfish, egotistic, uncharitable, and want people without health insurance to die in the streets. Or something. That's why they're Republicans and not Democrats! Chait's hypothetical Republican son-in-law's GOP affiliation simply means the onus is on the son-in-law to prove that he is none of those things while retaining his GOP identity.

We could re-hash a lot of Jonathan Haidt's work on the inability for strong partisans to even understand their opposition or Bryan Caplan's ideological Turing Test, but I'll just say that if you think your opposition is evil, you either don't understand them or you're a dirty consequentialist.

Here's how non-partyists might view their opposition: they're people motivated by a desire to do good but with different values or principles that inform their thinking, leading them to arrive at different - and maybe wrong - conclusions. For a consequentialist, though, it doesn't particularly matter what their ideological opposition's motivations are. It matters that they're advocating for policies that would make the world worse. The nexus of someone's values, principles, policy prescriptions and motivations doesn't matter. What matters is that they're on the wrong side, and thus should be treated differently.

To a certain extent, this is all performance art. We want to signal to our in-groups (in Chait's case, the cosmopolitan Left) that we're on their side and that the outgroup (conservatives in general here) should be ashamed of themselves. It might turn out that Chait's Republican son-in-law effectively feels no different treatment from Chait than would a progressive son-in-law and Chait merely quietly judges him from afar. It's a coherent and cohesive stance to take. But if we take seriously that ideological polarization is accelerating in America and that might be a bad thing, the attitude that Chait lays out here - that our partisan opposition should be treated differently as human beings - is going to make it worse.

Jonathan Chait is wrong on the internet. But he's probably not evil.**

*I'd argue this saying is unfair, as there are plenty of conservatives who think liberals are evil in addition to being wrong. My experience is that there are greater numbers of liberals who believe the other side is "evil" - largely because of the prevalence of consequentialism on the left - but there's plenty of bad faith to go around on both sides.

**To maintain some consistency here: I don't know Chait as a person. But his partisan affiliation alone is not something that makes him evil, or even worthy of being treated differently from any other stranger. In the absence of evidence that he's evil, we should all treat him with the dignity afforded any other human.