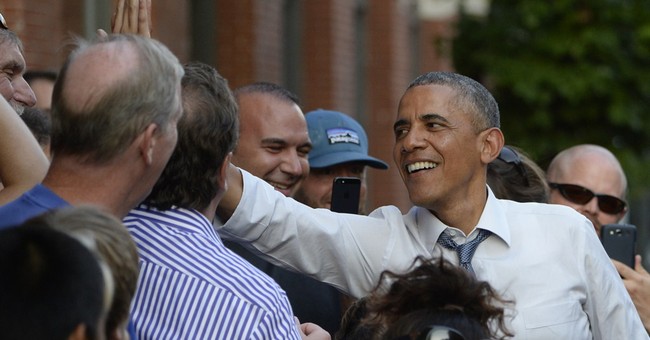 In a press conference in Dallas on Wednesday, President Obama responded to critics who noted he was refusing to visit the border in a time of crisis. "This isn't theater," the President said, before going further and saying "I'm not interested in photo ops."

Needless to say, commentators noted the absolute absurdity of that statement - it would be hilarious if the crisis weren't so serious.

A hashtag was spawned on Twitter as people noted the obsession that this White House has seemed to have with photo ops:

Many of those photos are instantly recognizable for the craven politicking that President Obama has engaged in, time and again, with regard to "photo ops."

The Obama White House, as has been noted, is absolutely obsessed with the management of its own image. They've gone to extraordinary lengths, including banning independent photographers from the White House, in order to control President Obama's portrayal in the media. Dylan Byers noted that even the mainstream media has become tired of the lockdown:

The White House Correspondents Association and several leading media outlets have sent a letter to the White House protesting its policy of banning photographers from covering the president at certain events.

"As surely as if they were placing a hand over a journalist’s camera lens, officials in this administration are blocking the public from having an independent view of important functions of the Executive Branch of government," the WHCA board wrote in the letter delivered to the White House press office.