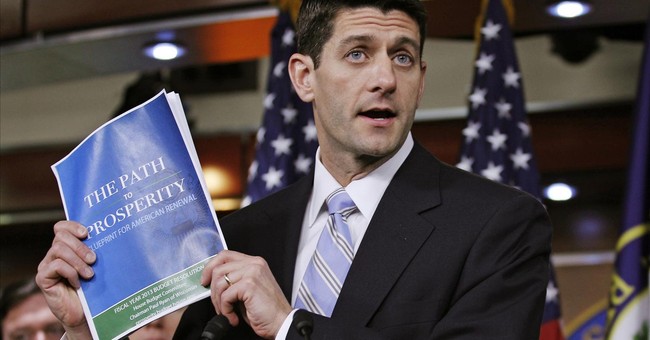 So the medium-term deficit is actually pretty manageable right now. What next?

Well, the deficit-shrinking policies of the last few years have bought us some time to deal with the real long-term spending problems that still threaten to blow up our budget in the second decade that stretches out before us. In 2038, the Congressional Budget Office projects, government spending as a percentage of GDP will be over 26% and our deficit will be 6.4% of GDP.

Guy yesterday highlighted some of the ways that the expanding government debt will drag the economy down:


The "official" US national debt is approaching $17 trillion. With unpaid-for, long-term obligations known as "unfunded liabilities" factored in, the real number is closer to $90 trillion. As the hapless residents of Detroit have learned the hard way, ignoring long-horizon "tomorrow" problems eventually packs a destructive punch.

A deficit at 6.4% of GDP would be worrisome but not much to write home about if America's public debt had not exploded. The financial crisis and resulting recession did a lot to balloon America's debt to levels not seen since World War II. And though the debt-to-GDP ratio came down quickly after WWII, no such predictions can be made this time: America's entitlement crisis is very real and in urgent need of action:

That lighter shade of debt on the right side of the graph there? That's the scary part. We're not seeing a mere spike. That massive debt is the new normal. There are many negative consequences of carrying such a large national debt, as the CBO writes:

The CBO finds that the debt burden will "reduce national saving and income" and that the increase in government borrowing in order to keep up its spending regime will crowd out private investment. Though short-term deficits and spending have a tendency to increase demand throughout the economy, such a status quo cannot exist in the long-term and will hurt economic growth.

The shrinking of the private economy caused by America's debt burden will also lead to reduced wages and fewer jobs in the long term.

Because the CBO doesn't believe that our long-term debt projection is sustainable, they forcast that tax increases and spending cuts are in our future in order to bring the federal ledger back into balance. Tax hikes tend to shrink the economy, obviously, and sharp spending cuts can be a negative economic shock as well. Conservatives in particular have much to be worried about - politicians tend not to want to touch popular - but expensive - spending programs, and soak-the-rich tax hikes are always politically more appealing.

3. Inability to deal with unforeseen problems

The financial crisis of 2008 was a once-in-a-generation event that created urgent public policy problems. Both Republicans and Democrats responded with proposals that would see an enormous amount of federal dollars injected into the economy. President Bush passed TARP and President Obama passed the ARRA stimulus, but even the minority Congressional Republicans opposed President Obama's stimulus with their own $700 billion stimulus program.

While we're unlikely to see an event like the 2008 crisis again, the federal debt will hamstring our ability to respond to smaller problems - and there's always the chance, even if unlikely, that we'll see a economic crisis of that magnitude again. The flexibility to respond appropriately is extremely important. Look to Europe to see examples of what happens if a government is too debt-addled to responsibly respond to a crisis. Speaking of...

4. A greater chance of a crisis


A large and continually growing federal debt would have another significant negative consequence: It would increase the probability of a fiscal crisis for the United States. In such a crisis, investors become unwilling to finance all of a government’s borrowing needs unless they are compensated with very high interest rates; as a result, the interest rates on government debt rise suddenly and sharply relative to rates of return on other assets. That increase in interest rates reduces the market value of outstanding government bonds, causing losses for investors who hold them. Such a decline can precipitate a broader financial crisis by creating losses for mutual funds, pension funds, insurance companies, banks, and other holders of government debt—losses that may be large enough to cause some financial institutions to fail.

They go on to write that "there is no identifiable tipping point" of debt-to-GDP that would precipitate such a crisis. But the possibility is there - and will certainly get worse as our debt burden mounts.

The fact that medium-term deficits have largely been tamed has only kicked the can down the road without addressing the underlying structural issues of our coming debt crisis. CBO director Doug Elmendorf wrote last week that "the fundamental federal budgetary challenge has hardly been addressed."

Medicare and Social Security still offer incredible budget challenges. The fact that America has made progress on non-entitlement program spending has merely put off the day of reckoning that our entitlement programs threaten to the federal budget. Our current debt - at levels that haven't been seen in 70 years and with no possibility of abatement - will hold back America's economy for the foreseeable future. Getting these problems under control should be of the utmost priority for politicians in Washington.