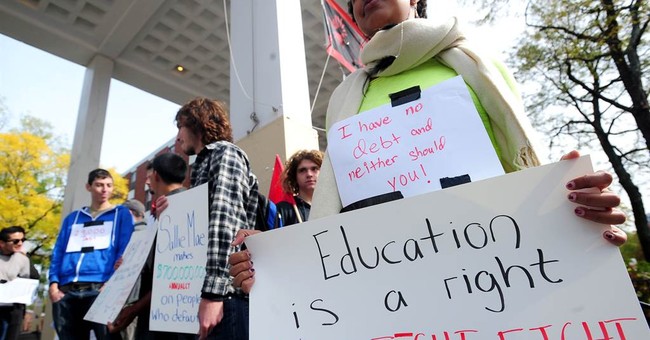 President Obama long ago began a campaign called "#dontdoublemyrate", trying to get out in front of Republicans on the issue of holding down the interest rate for federally-subsidized Stafford college loans, which were cut in half as a temporary measure and are set to expire today. President Obama launched this initiative last year and it's popped up again this year.

This is true: House Republicans have attempted to head off the student loan rate jump, while Senate Democrats have refused to entertain any realistic legislation to do the same even as they demagogue against Republicans for refusing to help out students.

The Washington Post's Dylan Matthews has a long discussion of the student loan issue today, but one of the major takeaways is that artificially holding down federally-subsidized Stafford loans is a pretty terrible idea:

There’s a growing body of literature suggesting that government programs like generous student loan rates encourage colleges to hike tuition. That, in the long-run, makes college less affordable for everybody. Additionally, unsubsidized Stafford loans and PLUS loans are very poorly targeted aid. If you think, as many experts do, that student loan programs generally lose money for the government, then losing money making college cost less for upper-middle-class kids is a bit hard to defend. Reed and Durbin’s plan, specifically, probably costs about $184 billion over ten years. That’s a lot of money that could do a lot of things.

Republicans have actually successfully gotten out in front of Democrats on the student loan issue. If certain Democrats (like Sen. Elizabeth Warren) got their way, federally-subsidized Stafford loans would become a much larger mess. This might be a better issue to let go, even despite Democrats' incoherence.