Kevin Glass
|
@kevinwglass
|
Posted: Feb 08, 2010 4:11 PM
Share   Tweet
Captain America, Marvel Comics' superhero, has been around as the company's embodiment of patriotism for well over half a century. In his most recent issue, however, we find him characterizing a protest as a bunch of white racists whose worst nightmare would be an African-American tax collector.

[W]e find that the Captain’s plan is to send the black man into a redneck bar to pretend to be a black man working for the IRS and to get everyone all mad… because… well, you know that every white person is a racist that hates black civil servants, right?

Marvel may deny that the protesters represented in this new issue are "tea party" protests. Decide for yourself: 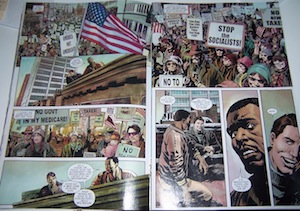