DHS Releases a 'Plan' for When Title 42 Is Lifted 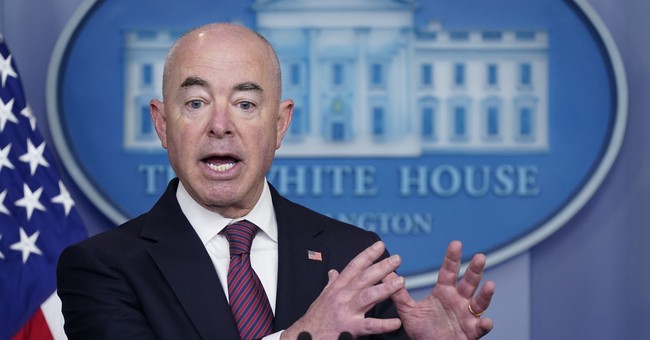 The Department of Homeland Security issued a six-pillar plan Tuesday night, ahead of testimony by Secretary Alejandro Mayorkas on Capitol Hill Wednesday, claiming to have a strategy for the lifting of Title 42 on May 23.

"A significant increase in migrant encounters will substantially strain our system even further. We will address this challenge successfully, but it will take time, and we need the partnership of Congress, state and local officials, NGOs, and communities to do so," Mayorkas states in the plan.

The pillars are the following:

Border Security Pillar 2: We are increasing CBP processing efficiency and moving with deliberate speed to mitigate potential overcrowding at Border Patrol stations and to alleviate the burden on the surrounding border communities.

Border Security Pillar 3: We are administering consequences for unlawful entry, including removal, detention, and prosecution.

Border Security Pillar 4: We are bolstering the capacity of non-governmental organizations (NGOs) to receive noncitizens after they have been processed by CBP and are awaiting the results of their immigration removal proceedings. And, we are ensuring appropriate

Border Security Pillar 5: We are targeting and disrupting the transnational criminal organizations (TCOs) and smugglers who take advantage of and profit from vulnerable migrants, and who seek to traffic drugs into our country.

Border Security Pillar 6: We are deterring irregular migration south of our border, in partnership with the Department of State (DOS), other federal agencies, and nations throughout the Western Hemisphere, to ensure that we are sharing the responsibility throughout the region.

Thousands of illegal aliens will crash the border today. Thousands will be released so they can, wink wink, "appear" in court later. They'll get free cell phones to "track" them that they'll promptly dump. @VP and @POTUS have zero intention of stopping it. None. They want this.

These simple solutions don’t give amnesty so they aren’t interested.