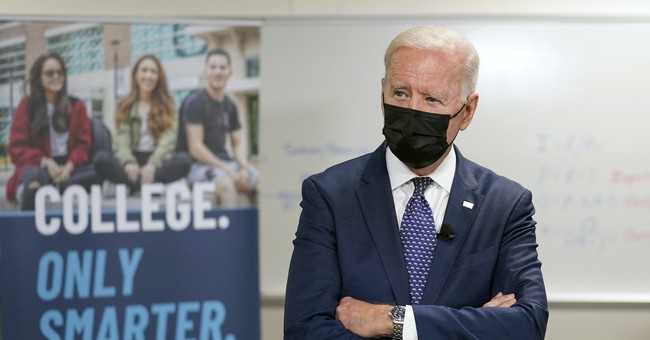 Speaking from the East Room of the White House Friday, President Joe Biden attempted to spin disastrous jobs numbers released by the Bureau of Labor Statistics.

LMAO Biden starts his speech about the jobs numbers by saying, "I want to put today's jobs report in perspective," says the report is another step in the economy showing "progress" since he took office, and proves why more money needs to be printed and injected into the economy. pic.twitter.com/5AJg3kd3pI

Biden blames Trump for the jobs report, but argues Americans shouldn't be distracted by it, saying we "have to keep our eye on the ball" and it "reenforces the real truth" that more government spending is a necessity to rebuild the economy and create jobs. pic.twitter.com/5PmG0vUMRE

O'DONNELL: "Do you believe enhanced unemployment benefits had any effect on diminishing a return to work in some categories? "

BIDEN: "No, nothing measurable." pic.twitter.com/XAOClMMlud

Meanwhile, Republicans are blasting Biden's big government spending spree and holding him accountable for the halt in economic growth.

"We should be clear about the policy failure at work here: There are 7,400,000 jobs open in the US – but fewer than 300,000 people found new work last month. Why? This tragedy is what happens when Washington know-it-all’s decide to pretend they’re generous by paying more for unemployment than for work. This obviously hurts our economy, but more precisely this hurts people on every Main Street in the nation," Republican Senator Ben Sasse released in a statement.

We were on track to a strong recovery.

"Joe Biden is squandering the economic recovery he inherited from President Trump and Republicans. The numbers don’t lie – this is the biggest miss on a jobs report in more than two decades and Biden’s failed policies are to blame," the RNC piled on. "Unfortunately for American workers and families, the unemployment rate rose for the first time during the recovery and ten million Americans are still out of work – all while the cost of everyday goods continues to rise. And yet, Biden wants to make the situation worse: he’s asking the American people to pay $3 trillion in tax hikes to foot the bill for his American Bankruptcy Plan."