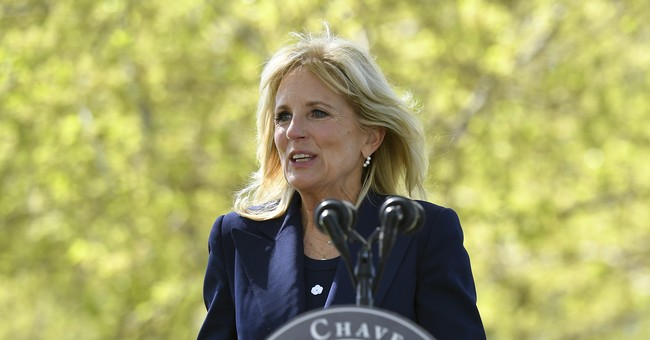 But that wasn't the only problem. During her remarks, the First Lady stood in front of Chavez' infamous black eagle flag. Chavez used Nazi propaganda and colors as the inspiration for the symbol.

"The story of the black eagle, the movement’s symbol, exemplifies Chavez’s skill as a tactician. He researched emblems, including cigarette boxes and Nazi flags, and concluded that the most potent color combination was red, black and white. He picked the eagle and directed his brother to draw the bird so simply that anyone could easily replicate the symbol," the Smithsonian states.

‘I’m owed a 3-day news cycle over THIS’ –> GOSH, that flag behind Jill Biden while she butchered the Spanish language looks sorta Nazi-ish https://t.co/pUqN7SGsEW

If Melania Trump gave a speech in terrible Spanish while standing in front of a flag that closely resembles that of a Nazi Symbol that's ALL we would be talking about for the next 2 weeks.

Jill Biden does it and the media doesn't even cover it.

Now, if she were speaking at CPAC maybe the leftist media would care.