New Memo Shows National Guard Being Forced to Stay at U.S. Capitol, Despite a Lack of Resources 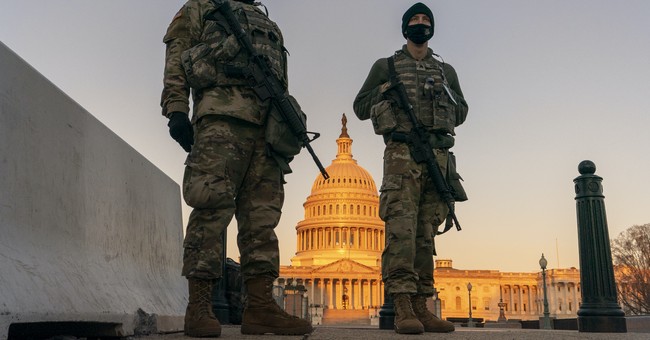 A new memo first reported by Fox News correspondent Gillian Turner shows the National Guard is unable to successfully carry out its mission at the U.S. Capitol and that resources throughout the country are being stretched to the maximum as troops are forced to remain in Washington D.C.

"Efforts to date have not secured enough volunteers among supporting states to meet the USCP request of 2,280 Soldiers, no Option B of 1000 soldiers," the memo, written by Chief of the National Guard Bureau General Daniel Hokanson, states.

"Over the past 12 months, States have experienced unprecedented demand for National Guard utilization related to COVID-19, Civil Disturbance, wildfire, hurricane and flood response, all while meeting every combatant comment deployment requirement. In addition, the states are currently increasing their internal requirements to support COVID-19 vaccination efforts and posturing for seasonal natural disasters as well as training for future deployments. This significantly increased operational temp directly impacts our ability to continue to man the mission with volunteers. To date, only 500 have volunteered to extend through the draft RFA end date despite our best efforts to marshal more volunteers."

"Additionally, faced with pressing needs within their states, numerous Adjutants General and Governors have expressed their unwillingness to order the involuntary mobilization of NG personnel to man the mission, Moreover, I am concerned that the continued indefinite nature of this requirement may also impeded our ability to man future missions as both Adjutants General and Guardsmen alike may be skeptical about committing to similar endeavors. Pursuit of other inter-agency law enforcement options seems highly preferable to requesting involuntary mobilizations under the current circumstances," he continued.

Despite these circumstances, Hokanson was overruled by Defense Secretary Lloyd Austin and the National Guard mission at the U.S. Capitol has been extended for an additional two months.