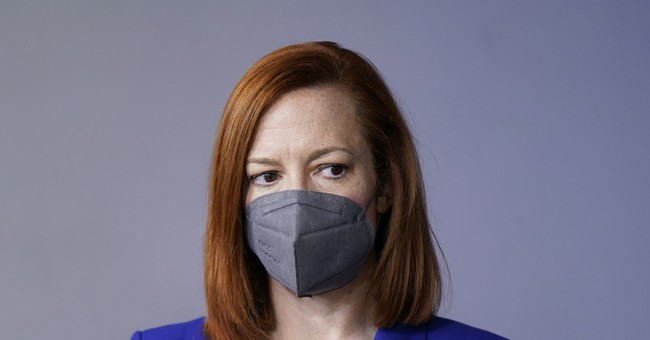 Speaking to reporters at the White House Tuesday afternoon, Press Secretary Jen Psaki was peppered with questions about the growing crisis on the border and admitted the federal government doesn't have enough room for the number of unaccompanied minors crossing each day. She also stated, again, that the Biden administration's border policies are causing an increase in crossings.

"In terms of the people who are being let it are unaccompanied children. That is a policy decision that we made because we felt it was the most humane approach to addressing what are very difficult circumstances in the region and that means there are more children coming across the border than we have facilities for at this point in time," Psaki said. "That means there are more children, kinds under the age of 18 of course, coming across the border."

ONCE AGAIN, Jen Psaki refuses to say that the situation at the U.S./Mexico border is a crisis and says the White House will not disclose how many people are crossing the border, including children pic.twitter.com/qof27WMKtc

TVA's @RichLatendresse (Canada's top French-language outlet) points out to Jen Psaki that the Biden administration's message to (illegal) immigrants about now not being the time to come to the United States is a fancy way of saying they should eventually flood north, but not now. pic.twitter.com/ayhMrwyuLW

When asked whether reporters will be allowed to visit Customs and Border Protection and HHS facilities where thousands of unaccompanied minors are being processed and housed, Psaki did not give a timeline for access.

Meanwhile, in recent Homeland Security Secretary Alejandro Mayorkas visited the facilities and has yet to brief President Biden on the situation.