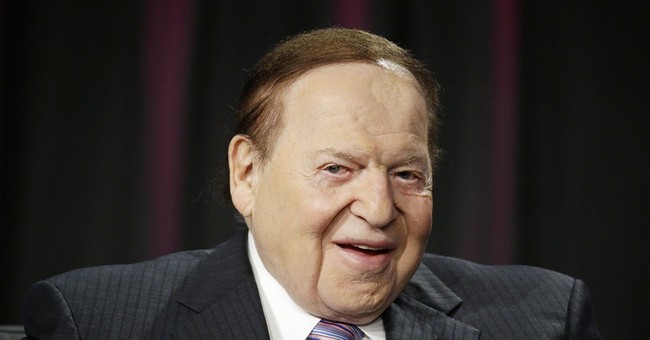 Conservative billionaire Sheldon Adelson has died after a battle with cancer. He was 87.

"It is with unbearable pain that I announce the death of my husband, Sheldon G. Adelson, of complications from a long illness. Sheldon was the love of my life. He was my partner in romance, philanthropy, political activism and enterprise. He was my soulmate. To me - as to his children, grandchildren, and his legions of friends and admirers, employees and colleagues - he is utterly irreplaceable," Miriam Adelson, his wife, released in a statement Tuesday morning. "Much has been written and said about how Sheldon, the son of poor immigrants, rose to the pinnacle of business success on the strength of grit and genius, inspiration and integrity. His was an all-American story of entrepreneurship. When Sheldon launched a new venture, the world looked on with anticipation. In our amazing 32-year adventure together, I was fortunate to witness the beauty of Sheldon's private side."

"He was an American patriot: a U.S. Army veteran who gave generously to wounded warriors and, wherever he could, looked to the advancement of these great United States. He was the proudest of Jews, who saw in the State of Israel not only the realization of an historical promise to a unique and deserving people, but also a gift from the Almighty to all of humanity," she continued. "And Sheldon was kind. He gave readily of his fortune to charitable causes that may literally be countless, as he expected no credit and often preferred anonymity. Although bluff in build and speech - and, in the last two decades, beset by painful sickness - Sheldon was always sensitive to the needs of others."

"Our founder and visionary leader, Sheldon G. Adelson, passed away last night at the age of 87 from complications related to treatment for non-Hodgkin's Lymphoma," they said. "Born to immigrant parents and raised in a poor section of Boston, Mr. Adelson went from a teenager selling newspapers on a street corner to becoming one of the world's most successful entrepreneurs. His achievements in the integrated resort and hospitality industry are well-documented."

"When the pandemic disrupted daily routines and dramatically impacted his business, Mr. Adelson was adamant that our Team Members across the globe continue to receive full pay and health care benefits even while the buildings in which they worked were closed. There are countless additional untold stories of his warmth and generosity – efforts for which he never sought recognition or publicity and would only reply with a smile if asked about them," they continued. "While his business credentials – having started or been involved in more than 50 different enterprises - are unquestioned, his dedication to philanthropy and commitment to his family will truly be his legacy.  He will be missed by people from all parts of the world who were touched by his generosity, kindness, intellect and wonderful sense of humor. The Adelson family asks for privacy as they mourn Mr. Adelson's passing.  A funeral will be held in Israel, the birthplace of Dr. Miriam Adelson, with plans for a memorial service held in Las Vegas to be announced at a later date."

The greatest Jewish philanthropist of our times, Mr. Sheldon Adelson has passed away. May his memory be blessed for all time.
Baruch dayan emet.

Sheldon Adelson’s life represents the best of the American dream. Susan and I send our deepest condolences and prayers to his family as the world mourns his passing. pic.twitter.com/QkL60v7iOE

It’s impossible to fully capture what a titan Sheldon Adelson was in every aspect of life. He was a genuine Horacio Alger story who pioneered his industry and changed Las Vegas. He was as selfless and philanthropic as anyone I’ve ever met. He was a hero.

Sheldon Adelson lived a true American life. Born from humble beginnings he achieved extraordinary things. He was a defender of America, a champion of Israel & a friend. His good deeds & legacy will continue to shape the lives of millions. We send our love & prayers to his family. pic.twitter.com/ncthuAeCoN

Saddened by death of Sheldon Adelson who went from poverty to wealth by vision & hard work. He loved America & was also one of Israel's greatest friends. He gave away more than he kept. Was no-nonsense, but had great sense of humor. Condolences to wife Dr. Miriam Adelson.