BREAKING: Trump Pardons a Slew of People, Including a Key Figure From the Mueller Probe 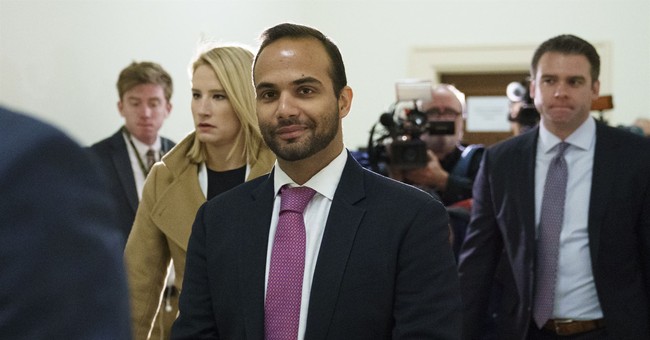 "Today, President Trump granted a full pardon to George Papadopoulos. Mr. Papadopoulos was charged with a process-related crime, one count of making false statements, in connection with Special Counsel Robert Mueller’s investigation into possible Russian interference in the 2016 presidential election.  Notably, Mueller stated in his report that he found no evidence of collusion in connection with Russia’s attempts to interfere in the election.  Nonetheless, the Special Counsel’s team still charged Mr. Papadopoulos with this process-related crime," the White House released a statement. "At the time that Mr. Papadopoulos allegedly made the false statements, he was not represented by counsel, and, after he was arrested, Mr. Papadopoulos gave additional information on his prior statements to the Special Counsel. Today’s pardon helps correct the wrong that Mueller’s team inflicted on so many people."

Thank you, Mr. President!!! This means the world to me and my family!

"President Trump granted a full pardon to Alex van der Zwaan.  His pardon is supported by former Rep. Trey Gowdy," the statement continues. "Mr. van der Zwaan was charged with a process-related crime, one count of making false statements, in connection with Special Counsel Robert Mueller’s investigation. None of his underlying conduct was alleged to have been unlawful, nor did prosecutors note any prior criminal history. Mr. van der Zwaan is a Dutch national who voluntarily returned to the United States to correct his statements and surrendered his passport upon entry."

The pardon of Papadopoulos and Zwaan come nearly one month after President Trump issued a pardon for former White House National Security Advisor General Michael Flynn, who was framed by the FBI.

"At the request of many Members of Congress, President Trump granted a full pardon to Duncan Hunter.  His pardon is also supported by former Commissioner of the Federal Election Commission Bradley Smith. Mr. Hunter has dedicated much of his adult life to public service. Mr. Hunter represented California’s 50th Congressional District from 2013 to 2020.  Prior to his time in Congress, Mr. Hunter was an officer in the United States Marine Corps.  Inspired to enlist after the September 11, 2001 attacks, Mr. Hunter saw combat in both Iraq and Afghanistan," the statement continues. "In 2019, Mr. Hunter pled guilty to one count of misusing campaign funds, an offense that could have been handled as a civil case via the Federal Election Commission, according to former FEC Commissioner Bradley Smith.  He was sentenced to 11 months’ imprisonment set to begin in January 2021.

"Today, President Trump granted a full pardon to Chris Collins, at the request of many Members of Congress. Mr. Collins served in Congress for nearly seven years, representing the people of Western New York from 2013 to 2019. Mr. Collins spent his early career as a successful businessman and entrepreneur, before devoting his life to public service.  In 2007, Mr. Collins was elected County Executive for Erie County, New York, a position he held for one four-year term, and in 2012 the people of New York’s 27th congressional district elected Mr. Collins to the U.S. House of Representatives.  He was subsequently re-elected to this seat three times.  During his tenure in Congress, Mr. Collins was known for his particular focus on the wellbeing of small businesses, agriculture, and sciences," the White House said. "In 2019, Mr. Collins pled guilty to the charges of conspiring to commit securities fraud and making false statements to the FBI.  Mr. Collins is currently serving his 26-month sentence."