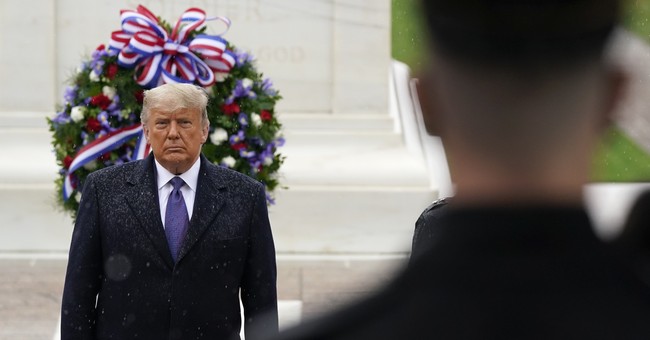 In the rain, Pres Trump and VP Pence salute, as Taps is sounded at the Tomb of the Unknowns at Arlington National Cemetery. pic.twitter.com/2dVFJRtcDa

"America's veterans have fought to defend our country, its values, and its interests since the first days of our founding.  They have defeated tyrants, eliminated terrorists, and secured freedom at home and abroad.  Their courage and fortitude in the face of adversity serve as an example for all Americans.  On Veterans Day, we pause to pay tribute to all who have proudly worn our Nation's uniform," President Trump released in a proclamation. "These Soldiers, Sailors, Airmen, Marines, and Coast Guardsmen selflessly placed lives, well-being, and security of others before their own.  We enjoy the privileges of peace, prosperity, and freedom because of our veterans, and we are forever indebted to them beyond measure."

"For their love of country and dedication to duty, America's veterans have endured adversity, loneliness, fatigue, loss, and made other incredible sacrifices.  Many sustained life-altering physical injuries and disabilities; others bear the burden of emotional scars for the remainder of their lives.  Our Nation's veterans fully understand liberty's high and precious cost, for they have paid it every day since the formation of our Republic," the proclamation continues.

After the event, President Trump returned to the White House.