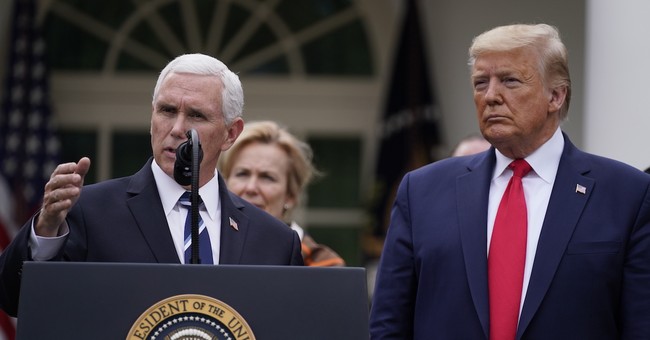 Speaking from the White House Monday afternoon, President Trump announced new and stricter guidance for restaurants, bars, the number of people at a gathering and more as the war against Wuhan coronavirus continues.

"We've made the decision to further toughen the guidelines and blunt the infection now. We'd much rather be ahead of the curve than behind it," Trump said. "My administration is recommending that all Americans, including the young and healthy, work to engage in schooling from home when possible, avoid gathering in groups of more than 10 people, avoid discretionary travel and avoid eating and drinking in bars, restaurants and public food courts."

"If everyone makes this change or these critical changes and sacrifices now we will rally together as one nation and we will defeat the virus and have a big celebration together," he continued. "Our government is prepared to do whatever it takes."

"We now need to appeal to every single American about stopping the spread of this virus," Dr. Deborah Birx said, specifically calling on the millennial generation to step up and take responsibility. "To be able to address this virus comprehensively, that we cannot see, for which we don't have a vaccine or a therapeutic, the only thing we have right now is the amazing ingenuity and compassion of the American people. We're appealing to all Americans to take these steps to protect each other and to ensure that the virus doesn't spread. These guidelines are very specific, they're very detailed, they will only work if every American takes this together to heart and responds as one nation and one people to stop the spread of this virus."

When asked how long Americans should expect these kind of restrictions to go on, President Trump said the virus could be "washed out" by July or August. He said the economy, which is taking a massive hit on Main Street and Wall Street, will "work itself out."