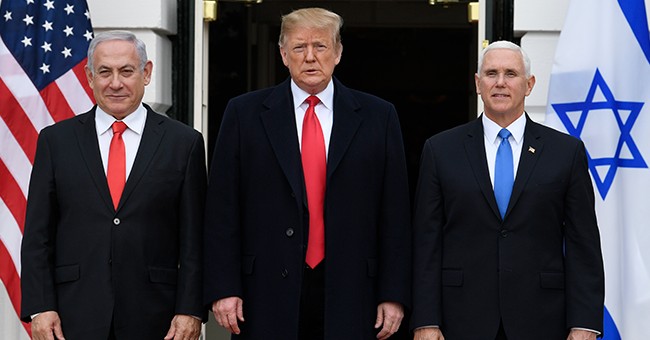 "It's an honor to have Prime Minister Netanyahu, a great friend of mine and a great friend of our country.  We’ve had a tremendous almost three-year relationship. I’ve known you many years before that, but this was three years of primetime, and we’ve done a lot for Israel. And the relationship, I think, has never been better," Trump said. "We're going to be discussing Mideast peace. We're going to be announcing a plan tomorrow at twelve o’clock.  And that’s a plan that Bibi and his opponent, I must say, have to like very much.  And I can say, in terms of Bibi, he does.  And I think in terms of his opponent, he does too.  I’ll be meeting with him in a little while."

"They say it's probably the most difficult deal anywhere, and of any kind, to make ... We have something that makes a lot of sense for everybody." pic.twitter.com/HWERFrD1XH

"Thank you Mr. President for your bold decisions and your bold actions. On behalf of the State of Israel, I want to thank you everything that you have done for Israel," he continued.

President Trump is meeting with Netanyahu and his political opponent, Benny Gantz, separately at the White House today ahead of the plan's release. Netanyahu and Gantz are locked into a battle for prime minister as Israel heads into its third election, scheduled for March, in three years.

Prime Minister Benjamin Netanyahu met today with US President Donald Trump at the White House in Washington. They will meet again tomorrow. ???????? pic.twitter.com/Xs4thMRpH2

Meanwhile the Palestinians, led by Mahmoud Abbas, refused to participate in any negotiation leading up to the plan and are already calling it "art of the fraud."